The Irish Times view on protests in Russia: Navalny is winning

The jailing of the opposition figurehead has brought swift international condemnation 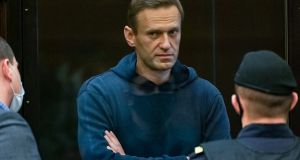 Russian opposition leader Alexei Navalny, charged with violating the terms of a 2014 suspended sentence for embezzlement, stands inside a glass cell during a court hearing in Moscow on Tuesday. Photograph: Handout /Moscow City Court press service/ AFP via Getty Images

It was by turns horror and farce – a legal sham whose result everyone present knew was pre-ordained but which required them all to play along as if they could exert some influence over proceedings. On Tuesday the Russian opposition activist Alexei Navalny was sentenced to three-and-a-half years in prison for breaking the terms of a previous suspended sentence by failing to report for appointments with the authorities. The reason for Navalny’s absence was that he was in a coma in Berlin recovering from an attempt to poison him using a military-grade chemical in Siberia last autumn. When his supporters responded to the jailing by marching peacefully in Moscow, they were clubbed, beaten and detained by police.

By locking Navalny up, the Kremlin may hope it has neutralised the charismatic 44-year-old as a political force. Undoubtedly it will be more difficult for Navalny to organise and to produce the online video investigations that have enabled him to reach a wide audience. But in another way, his jailing is proof that Navalny is winning his battle with the Putin government. A regime confident in its position would pay little heed to a man like Navalny, who has already been barred from contesting presidential elections. But while the regime pretends to be doing just that – Putin seldom utters his name – its actions suggest it is deeply alarmed by Navalny’s rise. The Kremlin has never recovered from the summer of 2018, when a steep increase in the pension age caused Putin’s popularity to slip. A decline in living standards and a chaotic response to the pandemic have been steadily chipping away at the regime’s standing, even if Putin can still count on support among older voters.

Navalny knew that by returning to Russia last month, he would end up in prison. But he also knew that by jailing him the regime would be turning him into a martyr, a totemic figure whose influence would expand even as his voice was silenced.

International condemnation came swiftly. But mere words will make no difference. They must be followed up with new sanctions and the freezing of regime-controlled funds in the West.