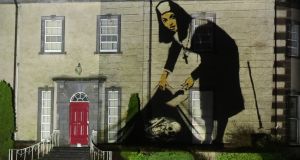 An image of a nun concealing a skeleton is projected onto Sean Ross Abbey, south of Roscrea in County Tipperary, Ireland, on St Brigid’s Day for The Herstory Light Show. Photograph: Niall Carson/PA Wire

The publication of the Report of the Mother and Baby Homes Commission of Investigation and the subsequent commentary and staging of events such as the HerStory light show on St Brigid’s Day should be used as an opportunity to listen, confront and accept the uncomfortable realities from the not-so-distant past.

The incarceration, punishment and ostracisation experienced by single mothers and their babies may have shone a spotlight on this dark period, but to view it as the closing of this sad chapter would be a fundamental error.

While the publication of the Commission’s work is to be welcomed, it is also a document which is rooted in a closed process and the cold, often sterile language of the law. It is telling that since publication many of those most affected have made clear that it has not met their expectations – and certainly does not represent closure.

To let matters rest now would be an affront to survivors, to adoptees denied access to the most basic information on their backgrounds and those who mourn lives lost to unmarked graves.

With survivors, leading experts in the field as well as human rights activists other avenues have been explored

As an independent cabinet member of the previous government I have long argued for a process of truth telling, reconciliation and reparation involving wider society. It would be deeper than anything which has happened before and allow us as a country to accept the reality of what has happened and to confront our past in order to move forward.

With survivors, leading experts in the field as well as human rights activists other avenues have been explored.

Working with Irish, UK and Spanish experts we formulated proposals for a “A Forum on Truth, Gender and Transformation”, underpinned by the guiding principle of transitional justice. Such an approach would encompass a coming to terms with varied forms of abuse of women and children, in different institutional settings within the greater part of the Republic’s history.

Five principles have been identified to guide this work. Central to these is that women’s rights must be respected in the process. What happened in the homes was part of a pattern of gender injustice that we cannot overcome if we do not acknowledge it. Similarly the new forum would have a child-centred approach. The need to meet accepted standards including obligations under international law would be recognised. Those most affected would be central to the design and implementation of next steps.

Finally it would be committed to developing meaningful and sustained partnerships with survivors, and families through which decisions can be implemented.

As an independent but State-established and funded body, a Forum on Truth, Gender and Transformation would receive, report on, and prompt a process of national reconciliation and reflection in respect of experiences of those affected by institutional violence.

Ireland as a country has transformed utterly, both socially and economically

It would not reproduce existing exercises in dealing with the past such as official enquiries or commissions of investigation. It would not be adversarial. It would not be legalistic nor inquisitorial. It would also add a new dimension by considering multiple forms of gender-based institutional violence rather than focusing on one place or form or time period.

It would draw out explicitly the ways in which institutional violence was often gendered and thus affected women and men, boys and girls in different ways. Further, we envisaged a prime role for our artists – that their expertise would be drawn on to develop novel and accessible ways of communicating testimonies and experiences in public forums or as part of public hearings.

Trying to predict the journey of such work would itself undermine the process. However, what we can say is that embarking on such a course would demonstrate Ireland’s genuine efforts to be truly a Republic of Equality, Justice and Love.

A tangible and real transition would see current social issues confronted including the marginalisation of the travelling community, an unrepresentative parliamentary system, poverty, child poverty and homelessness. This requires an acceptance that much of the architecture of past oppression has yet to be dismantled.

I presented this case to the then taoiseach, Leo Varadkar, and he agreed to work with me to develop its operational details. A cabinet memo for decision was in preparation and conversations with other ministers were held. Formulated and positive action was about to be taken when the ticking political clock called time on the government.

Now may be the time to resurrect this work.

Such an initiative can draw encouragement from the words of President Michael D Higgins in responding to the commission of inquiry, “the publication of the report is not a conclusion, but an indication of further work that is required to bring to light a fuller understanding of what occurred and why, and the need to vindicate the rights of those women and children who resided in the homes.”

Ireland as a country has transformed utterly, both socially and economically. Yet, it is also true that a not-so-distant past casts a long harsh legacy. Now is the time for a country which prides itself on being modern, open and equal to go beyond the clichés by confronting and accepting that legacy.

1 Mary Robinson’s former home in the heart of Ranelagh for €4.5m