Mediterranean youth running out of patience with elders

Immobile and gerontocratic political regimes are not delivering on promises 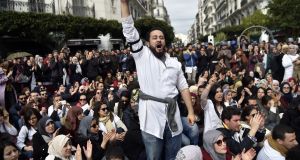 “Youth represents around two-thirds of the population of the region, yet their presence in the process of decision-making is almost null. We want to be involved in designing, implementing and monitoring policies related to our areas of concern.”

These words spoken to 10 foreign ministers from north and south of the Mediterranean by a young Algerian doctor bluntly express her generation’s ambitions and frustrations.  Migration, radicalisation, terrorism, revolution and passivity are common themes in the political discourse and policy analysis on the region’s youth. Yet many problems are common to both north and south, as youth unemployment figures and surveys reveal.

One of the ministers involved responded: “Youth is half the present and all the future. We should invest in youth leaders, not for tomorrow, but today. Let us build the economy together, not walls.” The Maltese foreign minister was addressing a meeting with 20 young people in the Young Mediterranean Voices programme last month. The programme was set up to help young people sharpen their skills in leadership, dialogue and advocacy.

They were selected from over 500 applicants, many of whom have participated in youth debating contests organised by the EuroMed inter-cultural Anna Lindh Foundation and its partners. Their enormous energy, talent, enthusiasm and openness to each other inspired those helping them steer ideas into realisable demands which were then advocated to the international ministers and decision-makers.

These were some of the ideas they put forward: Shared responsibility for development and integration to tackle migration. More forms of citizenship to allow mobility. Talent and humanitarian visas. Schools swaps. Votes for 16-year-olds. Youth councils to advise governments. Compulsory school classes in citizenship, debating and politics. Micro credits for poorer school students. A ban on single-use plastic in the Mediterranean.

The four themes chosen – migration and mobility, youth participation, education,  sustainable development and clean energy – reflected the most popular ones from the earlier series of debates in North Africa and the Middle East, representing thousands of their peers.

Linking migration and mobility to more equal development and multicultural integration catches many of the problems facing young people in the Mediterranean region. A Tunisian teacher told the seminar how a 15-year-old pupil in her class had despaired of his rural school’s limited curriculum and his poor career prospects; he died when he tried to cross the sea to Italy. She appealed for help and solidarity from the group. Some 3,811 Tunisians had fled to Italy by August last year, and 6,369 were stopped by police. In 2017, 1,600 died at sea. They were mostly from marginal and neglected regions of the country; their flight is known as the harqa.

Others choosing voice over exit have joined the reported 700 protests in the country in November last or the general strike last month in protest against a gerontocratic regime promising reform but failing to deliver on it. That’s how the revolution started in 2011 – and similar unrest is happening in Morocco, Algeria, Egypt and Lebanon.

Another Tunisian said he had to leave for study abroad after exposing high-level corruption. Young Egyptians described the repression there which drives youth to private passivity. Palestinians, Lebanese, Moroccans and Libyans told how impossible it is to move around the southern region as well as to the north because of tight border controls and visa regimes. A French Algerian said he was delighted to discover how welcoming members of the group were for his rusty Arabic, which he is now determined to improve. Spanish and Portuguese participants were fascinated to discover how similar are their concerns from either side of the sea.

All this positive energy is in sharp contrast to the negative images now surrounding Mediterranean migration and mobility. The subject is heavily securitised, especially from Europe, as are the region’s youth by moral panic over their bulging numbers and potential radicalisation.

Critics say the focus should rather be on how a combination of immobile and gerontocratic political regimes and societies in the south pressured to use neoliberal means by northern states results in hyper-precarity and insecurity for younger generations. No matter how well-educated, they are condemned to wait for proper participation rather than do it now.

Programmes like this are a progressive effort to combat false stereotypes and prejudice in the belief that lack of knowledge of the other brings hatred. They are based on surveys showing people throughout the region value hospitality and public engagement over forced migration or violence. These young ideas deserve a much wider hearing.