A hard Border would bring destructive clarity to the North

Solution is needed or else republican recruiters will take advantage 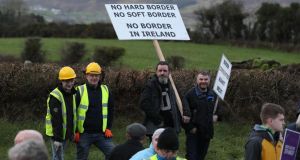 An anti-Brexit rally at the Border near Carrickcarnan in Co Louth. Photograph: Brian Lawless/PA Wire

It is too easy to be smug about the relative peace that has prevailed in Northern Ireland over the past 20 years.

Attitudes towards community and national identities have been shifting, and there have been signs that the younger generation is becoming less defined by the politics of tribalism and fear.

However, Northern Ireland is not an integrated society – clear community divisions still remain; witness the depressingly large number of peace walls which still exist and the continued now two-year suspension of devolved government in the North.

Such division was not just exploited but exacerbated during the Troubles, and transformative repellent forces could be brought to bear again over the current border issue.

Those who understand the dangers – former heads of the Police Service of Northern Ireland and MI5 – have issued dire warnings over a hard border this week.

Constructive ambiguity underpins the Belfast Agreement. A hard border would bring about a destructive clarity, spelling out to nationalists that they are no longer as Irish as they would like to be. The clarion call this issues to those sympathetic to dissident republicans should be obvious.

But demographic changes favouring nationalists mean many, including moderates who supported the status quo before Brexit, will see it as a chance to push for a border poll, which will in turn activate potentially violent contrarian strains of unionism.

The threat of a return to violence in Northern Ireland has thus hung over the Brexit negotiations like a dark cloud. Recent dissident republican activity in Derry is the physical manifestation of this hazard.

Those close to the issue will not be surprised that such groups have capacity to carry out violent acts in the here and now, before any hard border has been decided on, never mind been built. The New IRA, as the grouping has been styled, is fervently hoping that the border will be, in the words of a sympathiser, “as hard as hell”.

While the peace process and resulting Belfast Agreement went a long way to neutralising mainstream support for violent republicanism, a core of hardened irreconcilables remained, convinced the agreement was a betrayal or sell out.

Twenty years on, they have fused with a younger generation of romantics for a united Ireland who find the prospect of a whiff of cordite exciting, and who are too young to remember the horror of the Troubles.

The main difference between now and the Troubles is the determination of Northern Ireland society as a whole not to return to the dark days.

The wall-to-wall condemnation of the Derry car bomb has been typical of the political rejection of violence in recent years and underlines the absence of societal support for the men of violence. Yet this is not a reason for complacency: the New IRA is still able to recruit.

Young people are still being reached, inspired and, ultimately, sheltered from moderate thought.

They are also kept away from the prying eyes of the security services through a combination of clandestine communication and indoctrination that paints the forces of peace as the enemies of Ireland.

We need to recognise the extent to which the world has changed since 1998. A new era of technology enables dangerous pockets of extremism to survive – and thrive – even with moderating factors all around.

Encrypted communication tools mean extremists can cloak their communications from security services with more ease than ever before. Social media provides an outlet for propaganda that legitimises and reinforces dehumanising violent ideology.

We once expected social media to connect the world. We now know it can provide safe dark recesses for murderous world views rightly marginalised from mainstream debate.

While addressing new technology is important, the political outcome will be the decisive factor on whether Northern Ireland’s dissidents foment violence in another generation.

In reminding people of the dreadful pre-Belfast Agreement days, we need to undermine the arguments of the men of violence by ensuring that there is no return to a hard border.

The European Commission’s recent statement that no deal would inevitably mean a hard border was, like many of its Brexit interventions, profoundly unhelpful. The British government needs to turn its back on a no-deal Brexit and both the Irish and British governments must be willing to continue talks on potential alternative arrangements and solutions to the border issue which can obviate the need for a backstop.

In short, a more constructive approach is needed on all sides to finding a solution that avoids a cleavage of the island of Ireland, removing the motivation for potential dissident recruits.

In the meantime, we need to build on ongoing security work to close off the digital means for terrorist recruiters to reach disaffected young people.

1 ‘Insane’ gathering of hundreds of students in Galway condemned
2 Do headstands, clear out a junk drawer, have sex: 15 ways to re-energise your day
3 Prepare for six to nine months of Covid-19 restraints, warn health officials
4 Sean Quinn stunned at rebranding of Quinn Industrial Holdings
5 Probate is changing: What does that mean for you?
Real news has value SUBSCRIBE