The Border issue and Brexit 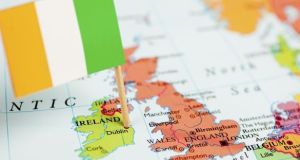 Sir, – John Hynes (November 30th) fears that Ireland is being used as a pawn by the Brexiteers to extract the same concessions made for the island of Ireland for the whole of the UK.

However, it’s important that Ireland must not be a pawn for the Euro-federalists either, that once the UK has reached an agreement with the EU we are not opened to renewed EU assaults against our tax regime.

It’s not in Ireland’s interest to indulge in the EU’s current refusal to discuss trade with the UK by enforcing its veto, as this could only embolden the Brexiteers to enforce a hard border.

Taoiseach Leo Varadkar’s critical line against Britain at the European Union summit in Sweden earlier this month should have been balanced with an equally firm line against the leadership of the EU. As a result, Ireland has only drawn the ire of the Brexiteers at a time when we continue to need Britain as an political ally. – Yours, etc,

A chara, – This talk of not allowing Brexit talks to proceed to trade issues until the Border question is finalised gets more surreal by the day.

Let us say that Britain gives an unequivocal commitment – in writing – that there will no tariffs or interference with the movement of goods or people across the Border, what will happen then?

When the trade talks get underway, the EU will say that this agreement means that Britain must stay in the customs union and single market, while the British will say that their people voted against this. The EU then either accepts that Ireland’s trade relationship is a unique exception to the rules, or insists it be discarded.

The reality is that precise arrangements for cross-Border trade can only be finalised when we know what the overall Brexit trading arrangements will be, including in those arrangements commitments concerning Ireland’s situation. We should keep and be willing to use our veto to say no to a final deal that doesn’t suit us, but not to prevent negotiations on the matters that are central to us. – Is mise,

Sir, – I suspect that we may soon receive assurances from Westminster that, due to its deep concern for the people of Ireland, North and South, they will do everything within their control and take all steps possible to ensure that, in the future, the sun will rise in the west. – Yours, etc,

A chara, – The British caused this mess and it’s up to them to find the solution! Ian Paisley jnr might be better employed finding those solutions rather than engaging in fantasy! – Is mise,