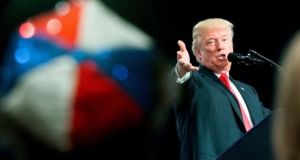 Sir, – Donald Trump’s retweeting of three unverified anti-Muslim videos from the Twitter account of Britain First’s far-right deputy leader Jayda Fransen is a serious development and a frightening new low, even for him (“Trump shares anti-Muslim videos tweeted by far-right group”, November 29th). Ms Fransen was convicted of religiously aggravated harassment in 2016 and is currently facing race-hate and abuse charges in Belfast and Kent.

Last August, the American president sailed very close to the wind when he said that “many sides” were involved in the violence in Charlottesville and that there were “very fine people” among the neo-Nazi demonstrators there. Those highly contentious comments left him open to suspicions of being a white supremacist fellow traveller. Now, he has abruptly and inexplicably blown the door wide open to further accusations of being actively racist. – Yours, etc,

Sir, – Donald Trump has played the media brilliantly. Every idiotic and nasty tweet is displayed all over the media. It is a distraction strategy that both deflects attention from his legislative failures and reassures his base support.

His latest gem has come as an early Christmas present for a tiny group of British extremists.

Is there any chance that the media might stop acting as Mr Trump’s “useful idiots”? – Yours, etc,