Maurice McCabe – a force for justice 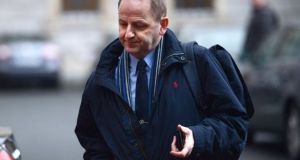 Sir, – In the normal course of events, Sgt Maurice McCabe might have been an inspector by now. Instead he finds himself let down again by the Department of Justice not doing what it could, and should have done.

We have learned that it was an assistant general secretary who advised the then-minister for justice Frances Fitzgerald that she had “no function” (in one respect) when her advisers and officials discovered that counsel for the Garda was about to attack the integrity and motivation of Sgt McCabe at the O’Higgins inquiry in 2015.

Did an official also advise her this year not to act on my email? I suggested in February adding two short terms of reference to the proposed disclosures tribunal, to make it harder for those with something to hide to frustrate Judge Peter Charleton.

Of course the then-minister was not obliged to reply to me, and she did not, although Micheál Martin, to whom I sent a copy of the email, acknowledged it.

Having written many articles on the Sgt McCabe story since March 2013, and along the way submitting queries and a freedom of information application to the Department of Justice, I had hoped for a considered response to two serious points.

At least now there’s a guide for those who want to play catch up on a scandal that goes to the heart of this State.

Just published, Michael Clifford’s A Force for Justice: the Maurice McCabe Story (Hachette Books) is a moving, fair and readable account by a reputable journalist that highlights clearly for any citizen issues that are more important than the future of one politician. – Yours, etc,

1 Coronavirus: People in close contact with Belfast patient identified
2 Murder in a crowded house: The full story of the Patricia O’Connor trial
3 Joshua Allen jailed for 15 months for drugs offences
4 Britain is uncomfortable because Ireland has the upper hand for the first time
5 Coronavirus advice: Wash your hands and avoid hugging, kissing and hand shaking
Real news has value SUBSCRIBE