‘God Save Ireland’ – An Irishman’s Diary on the Manchester Martyrs 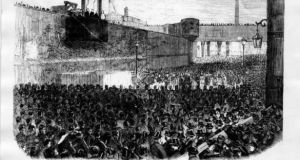 The Manchester Martyrs were executed on November 22nd, 1867

As darkness fell on Friday, November 22nd, 1867, thousands of people converged on the square in front of the New Bailey prison in Salford, outside Manchester, or crowded into the little streets nearby, in the hope of seeing the execution next morning of three Fenians – William O’Meara Allen, Michael Larkin and Michael O’Brien (alias Gould).

The men had been part of a group of five sentenced to death three weeks earlier for the murder of Sgt Charles Brett during a successful attempt to rescue two of their comrades, Thomas J Kelly and Timothy Deasy, from a prison van on September 18th.

Another, Edward O’Meagher Condon (alias Shore), an American citizen, had been reprieved, and the fifth, Thomas Maguire, who had a cast-iron alibi, was released following a petition by journalists.

Some people brought their own food and drink. Others bought potatoes roasted by street traders on little stoves or refreshed themselves in the local beer cellars and gin palaces.

The pressmen present estimated that up to 12,000 people came to the area but many left when they discovered that the police had erected numerous barriers to prevent a riot or an attempt to rush the scaffold outside the wall of the prison and that only the 2,000 early arrivals would have a clear view of the proceedings.

Around 6.30am, the head hangman, William Calcraft, emerged onto the scaffold from inside the prison to fix three ropes on a crossbar. Shortly afterwards, large numbers of police and soldiers with fixed bayonets took up positions to protect the platform.

Meanwhile the men were attended by three priests, including the prison chaplain Fr Charles Gadd, who said Mass and gave them communion.

At 7.48am, Calcraft and an assistant pinioned the men’s arms to their sides and led them up the steps inside the prison to the opening behind the platform. Larkin faltered but Fr Gadd steadied him. As they stood over the trapdoor, O’Brien kissed Allen. Then the hangmen tied their feet and covered their heads with white hoods. At 8.03 am Calcraft pulled a bolt and the three men dropped. Exploding fog signals on a nearby railway line momentarily frightened the crowd but the only other sound was a shriek, which the pressmen speculated may have come from Allen’s betrothed.

Calcraft then went to the curtained-off pit beneath the platform to check on his handiwork and found that while Allen was dead, Larkin was twitching and O’Brien was convulsing violently. He pulled on Larkin’s legs or jumped on his back to finish him off, but Fr Gadd who had followed prevented him from touching O’Brien and remained with the man, holding a crucifix in his hands, until he died about 45 minutes later.

The executions caused immediate and widespread anger in Ireland, where it was widely, and correctly, believed that, while the men had taken part in the rescue, none of them had fired the fatal bullet.

On Sunday morning a “dense congregation” in St Augustine’s Church in Dungarvan, Co Waterford, prayed fervently for the dead men and next day three priests in the same church celebrated a requiem Mass while a catafalque lighted by six large candles stood before the altar which was draped in black and, according to a contemporary report, “the church bell sent forth lugubrious peals”.

In subsequent days, Masses were said and mock funeral processions took place in other towns and cities , including Cork, Dublin, Limerick, Bandon, Skibbereen, Mitchelstown and Midleton, despite the disapproval of most of the bishops. In Dublin, Paul Cullen reluctantly permitted private Masses but David Moriarty in Kerry imposed a complete ban. In Tuam, on the other hand, John MacHale actually presided at a “Requiem High Mass” on December 7th.

Meantime, TD Sullivan the editor of the Nation newspaper hastily composed a song about the men to the air of Tramp Tramp, Tramp the Boys Are Marching, an American military tune. He took as his motif the words “God Save Ireland” uttered by Condon when the death sentences were pronounced and published it on December 7th. It became the de facto anthem of nationalist Ireland for almost 50 years, and less than 20 years after it was written, the MP and journalist TP (“Tay Pay”) O’Connor could write that “wherever in any part of the globe there is now an assembly of Irishmen, social or political, a concert in Dublin, a convention in Chicago, or a parliamentary dinner in London, the proceedings regularly close with the singing of God Save Ireland”.

The bodies were transferred to the new Strangeways Prison in 1868 and, when this gaol was being renovated in 1991, the remains of all those buried there were cremated. But as the bodies of the Manchester Martyrs hadn’t been segregated, their ashes couldn’t be identified, and so efforts by the Irish government in 2006 to have them brought to Ireland came to nothing.

5 I’ve just won a scholarship. So the Government wants to take away my disability allowance