Climate change: too little, too slow

Some EU states have agreed to accelerate emissions cuts before 2020, but in Ireland emissions are increasing 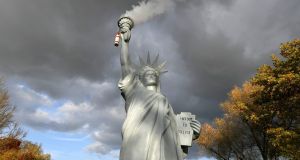 A replica of the Statue of Liberty by Danish artist Jens Galschiot emits smoke in a park outside the 23rd UN Conference of the Parties (COP) climate talks in Bonn. Photograph: Martin Meissner/AP

UN secretary general António Guterres provided a short but stark briefing note to heads of government gathered in Bonn for the final days of the annual UN summit on climate change. “Floods, fires, extreme storms and drought are growing in intensity and frequency. Atmospheric levels of CO2 are higher than they have been for 800,000 years,” he said. Climate change, he added, was the defining threat of our time.

Climatic turmoil evident in 2017, combined with US president Donald Trump’s announcement that he was withdrawing the US from the Paris agreement, concentrated minds. It meant a broader agenda had to be considered beyond a “rulebook” on implementing the accord.

“Pre-2020 actions” have assumed critical importance because of acceptance they are now necessary if there is to be any chance of keeping global temperature rises to less than 1.5 degrees this century. Some EU countries led by France and Germany agreed to accelerate emissions cuts even before 2020, when compliance targets begin to take effect. Ireland is a different category; its emissions are increasing.

There is merit in a new process in which states have agreed to regularly and publicly detail the efforts they are making to address climate change and pinpoint areas where they are falling short. For Ireland, it will mean no place to hide, though progress in some sectors is beginning to become evident – notably in renewable energy use. The formation of an alliance to end coal power generation illustrates real action is possible within tight time-frames. For the UK the end comes by 2025. Ireland should join the group by saying when it will stop coal use at Moneypoint power station.

The problem is so many commitments under Paris are already behind schedule. There are warning lights too indicating much of what was agreed will not be enough. Current pledges would see a catastrophic 3 degree rise by 2100. Financial commitments to vulnerable countries have not matched the promised $100 billion annually, when it is clear trillions of dollars are needed.