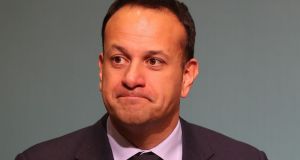 Despite the apparently enthusiastic backing of the then minister for health (one L Varadkar), open disclosure did not make it as far as a full legislative proposal until it was shoehorned into the Civil Liability (Amendment) Bill last year. Photograph: Niall Carson/PA Wire

The Dáil was in ferment this week over the cervical screening scandal and the plight of women exposed by it.

Much of the anger was directed against Tony O’Brien and the HSE. Mary Lou McDonald bluntly demanded O’Brien’s head, telling the Taoiseach to “remove that incompetent man”.

Later O’Brien was subjected to a comprehensive monstering for several hours at the health committee by women deputies of all parties, with Fine Gael’s Kate O’Connell characteristically prominent in tearing strips off the HSE chief.

Deputies did a good job at representing the anger and fear many women felt at this latest failure by the health authorities.

But then, the Dáil is good at this sort of thing. What the Dáil is not so good at is doing its principal job: making laws.

Take the mandatory disclosure of medical mistakes, a central failure in the screening scandal. In the wake of the revelation that Vicky Phelan and other women who receive dud smear test results – with catastrophic consequences – were not informed of the error, everyone was demanding it last week. The Government promised to introduce it.

But actually, if people had been doing their job properly in parliament, it would already be law.

Mandatory open disclosure, or a “duty of candour”, which would oblige doctors and health authorities to disclose to their patients when mistakes had been made in their care has been on the political and policy agenda for several years. Similar laws had been introduced in other countries, including the UK, where a mandatory (rather than a voluntary) scheme has been introduced.

In Ireland, doctors and the health establishment in the Department and the HSE were greatly discombobulated by the prospect of a mandatory scheme, and strongly opposed it. They were active in the matter, considered in public but energetic in private, and urged politicians to adopt a voluntary model. Open disclosure as general policy was introduced in 2012, but it is not required by law.

As part of a wider political discussion over the rising costs of medical claims, it was discussed by the Oireachtas health committee as far back as 2015. Then, deputies and senators agreed with patient advocacy representatives and other stakeholders that there was a need for a statutory duty of candour with protective legislation for such disclosures and apologies. A subsequent report from the committee endorsed that view.

The issue returned to a new health committee after the 2016 election, where health officials Dr Kathleen McLellan (director of patient safety) and Dr Tony Holohan (chief medical officer) advised against a mandatory scheme, suggesting that a voluntary scheme would be more conducive to changing the culture of secrecy and non-disclosure in the health service.

A fair point, but this was advice which TDs present – whose job it is to legislate – rejected. “Unless it is mandatory, we will not get the culture change that is so desperately required,” Louise O’Reilly of Sinn Féin responded. A fair point, too.

Despite the apparently enthusiastic backing of the then minister for health (one L Varadkar), open disclosure did not make it as far as a full legislative proposal until it was shoehorned into the Civil Liability (Amendment) Bill last year, a Bill principally intended to allow for staged payments in medical negligence awards.

At a subsequent committee meeting for pre-legislative scrutiny of that proposal, TDs and senators again spoke in favour of a mandatory disclosure obligation. However, when the committee’s report was published, it came down in favour of a voluntary regime, surprising some members of the committee.

Dr Nuala Carney, who has studied the early part of this legislative process in detail and to whom I am indebted for sharing her masters’ thesis, says that she regards this as “an inaccurate reflection of the debate”.

Oddly, the report suggested that an earlier consideration of the issue, the Madden Report, recommended the voluntary disclosure approach. In fact, it recommended the opposite.

When the Bill was presented to the Seanad last year, the Upper House was told that it was the preference of the Health Committee for a voluntary regime. The Bill was duly passed by the Seanad.

However, when the bill moved to committee stage in the Dáil, Clare Daly and Mick Wallace pushed an amendment to make disclosure in such circumstances mandatory. The government – represented by junior minister David Stanton – strongly opposed the amendment. But pushed to vote, Daly and Wallace won with the support of Sinn Féin and Fianna Fáil. The Bill was changed to include mandatory reporting.

But when the Bill reached its final stage in the Dáil, the Government was ready. It tabled an amendment overturning the Daly/Wallace changes. Crucially, this time Fianna Fáil had been squared off, and abstained; the Government amendment was passed. The Bill became law without mandatory disclosure.

My apologies to readers for this legislative rollercoaster. But what it demonstrates are very important things about how we make our laws, and govern ourselves. It shows us that ministers, parties and TDs are hugely swayed by the concerns of officials and established state interests. It shows us that these actors know how to play and push the legislative process. And it shows us that most TDs and senators do not pay remotely enough attention to the principal duty as legislators.

When there is roaring and shouting to be done, there is a queue of the lads ready to stand up and be counted. But when the hard grind of legislative work is on the agenda – when they need to think, decide and then stick by it – there are very few willing to step up to the plate.

1 Transmission of Covid-19 on flight into Ireland linked to 59 infections
2 Covid-19: Range of key indicators on spread of disease starting to ‘level off’
3 When Anthony Clare met ‘calculating, disturbing’ Jimmy Savile
4 Sacha Baron Cohen: ‘I had to ring the alarm bell and say democracy is in peril’
5 Two hundred Irish retailers for all your online Christmas shopping
Real news has value SUBSCRIBE