Pat Leahy: politics has been described as a combination of high purpose and low cunning 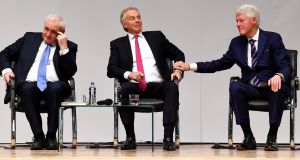 Bertie Ahern, Tony Blair and Bill Clinton at a Belfast event to celebrate the 20th anniversary of the Belfast Agreement. Photograph: Reuters/Clodagh Kilcoyne

It is one of the greatest political achievements that many of us will ever see, and there are many lessons to take from the 20th anniversary of the Belfast Agreement, marked this week by events in Dublin and Belfast. Chief among them are the need for leadership, courage and compromise.

The architects of the agreement – or most of them (John Hume and the late Mo Mowlam were absent) – resisted for the most part the temptation to indulge in old-fart weren’t-we-great-altogether nostalgia.

Yes, they told and retold the stories of the long days and nights of negotiations and the final thrilling decisive climax that changed the country irrevocably for the better.

But they also reminded the current crop of leaders of the need to lead, to compromise, to see past differences and to consider the bigger picture. In public they did this gently enough; in private, I imagine, the advice was sharper.

It is easy to lead when everyone wants to follow you. The test of true political leadership is when it requires courage to lead people in directions they would rather not go.

For many people the appearance of the class of ‘98 cast an unfavourable light on the current leaders in Dublin, Belfast and London. The chemistry between the ‘98ers – as so often in human affairs like politics – was the irresistible secret ingredient that unlocked progress. To say it does not exist among the various leaders at present is something of an understatement. But too often today’s leaders give the impression of not even trying to compensate for the absence of chemistry.

Blair, Ahern and Clinton were political giants. Hume also. Adams and Paisley too in their own way. Trimble was a more limited politician, and a leader of lesser stature, but he made one of the most difficult and bravest moves considering the nervous and hostile state of much of political unionism at the time.

Reputation is flimsy and transient; it is political deeds that endure. As the Bible says, ye shall know them by their fruits.

Blair, Bertie et al were not yet in 1998 the figures of immense political significance that they were to become; they were just leaders trying to practice good authority and good government, trying to succeed where many others had failed.

They were brave. They led their tribes in uncomfortable directions. They took risks. They practised leadership when the costs to them might have been immense, and they did so skilfully and effectively. They had intention but also ability; that is what made them such impressive leaders. The lessons for today hardly need to be spelled out.

Leadership is most clearly seen in the big things, and there are whoppers aplenty facing the new generation of political leaders in Ireland. The North. Brexit. The challenge of using the current prosperity wisely, and distributing its bounty fairly, rather than showering it on those with the advantages of proximity and volume. The opportunity to embed a stable model of economic and social progress.

These will require leadership of the sort not yet evident in the current generation. As Ahern noted, most are not in their jobs all that long. But as Clinton warned, they won’t get that much longer to settle in either.

Ahern and Havel met a number of times when Ahern was taoiseach and Havel president of the Czech Republic. They had high regard for one another despite the Bert’s curious habit of referring to him as “Vastar Havalle”. I’m told by people who knew him that Havel was closely aware of and admired greatly Ahern’s work on the peace process. Havel was a man of letters, but also a practical politician. He was a respecter of deeds as well as words.

Like his contemporary Mandela – whose post-Apartheid struggles with the ANC to construct a policy inclusive towards whites were described by Clinton in UCD on Monday evening – Havel knew that the hardest struggles were not with your enemies but with your friends.

After the Velvet Revolution of 1989, when he was acclaimed president by a unanimous vote of the parliament, Havel resisted widespread demands for retribution against the communists who had imprisoned him and thousands of others. “We are not like them,” he said.

The careers of Havel and Mandela, as well as Hume and the Good Friday generation of British, Irish and US leaders, remind us of the possibilities of politics.

Too many people have come to regard politics as a cheap and sordid business. Politicians themselves are often to blame for that, it is true. But as the Belfast Agreement demonstrates, it is possible to achieve great good in politics – perhaps more than in any other sphere of human activity.

But, unlike many other fields, politics requires its practitioners to morally compromise themselves in the achievement of that greater good. Sometimes they must dissemble, scheme, cut deals and compromise in the service of greater good. For one example, Adams almost certainly misled many people in the IRA leadership about his ultimate intentions. How many times did people say things that they didn’t believe, or that weren’t true to deliver the agreement?

As the American writer David Brooks has noted, politics is a marriage of high vision and low cunning. We see much of the latter. It’s useful to remember, from time to time, the primacy of the former.