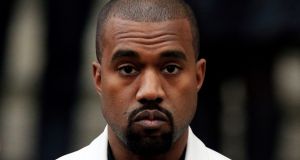 Kanye West: This is not a man of ideological inflexibility - though slightly shocked by the appearance of the full Irish breakfast, he asked for advice and guidance on the issue before coming to an informed decision. Photo : Jonathan Brady/PA Wire

The posters have gone up in Chicago, New York and Los Angeles - they feature the hashtag #Kanye2024 and the slogan “Keep America Great Again”. If delusions of grandeur, erratic tweeting and a shocking lack of knowledge of both history and politics are now the indications that a wealthy celebrity is announcing his candidacy for the US presidency, then Kanye West has just filled his White House Bingo card.

The beleaguered rapper may be having a Charlie Sheen moment as we speak - West’s “dragon energy” being his version of Sheen’s “tiger blood” - but if the once notorious actor can pull himself together and now be regarded as an important advocate for HIV awareness, then West too can steady his ship and follow through on his promise this week that he would indeed be running for the US presidency in the 2024 election.

This is of significance to Ireland. If Bill Clinton can be described (as he never tires of telling us) as “the first black US president”, then West will be the first Irish-US president.

At various times over the past few years, West’s odds with bookmakers of becoming US president have always been shorter than those previously held by Donald Trump. Indeed, as West noted after Trump’s 2016 election “Rappers are the philosophers of our now, celebrities are the influencers of our now. Just look at the president - Trump wasn’t in politics and won”.

West is not just a mega-celebrity and a lightning rod for the culture wars but has the formidable Kardashian social media army behind him. Who needs Cambridge Analytica when your wife has over 110 million Instagram followers?

He has a profound knowledge of Irish affairs - more so than any previous US president. This is a man who had the moral fortitude to have his honeymoon in Co Laois.

At a face to face interview with him in Dublin some years back, I had the unnerving experience of arriving 30 minutes late due to a Dart malfunction.

From the direction I was travelling I needed a “Greystones” train but not being a habitual Dart user I had happily let a few “Na Clocha Liatha” trains pass me before realising my mistake.

No human being should ever have to go through the experience of walking tremulously across a Dublin hotel lobby towards a figure sitting bolt upright in an armchair with his eyes boring into you who goes by the name of Kanye West.

A weak attempt at ice-breaking didn’t help: “You look really angry!” I jauntily offered. “That’s because I am really angry” came the mirthless reply.

However once I explained the Na Clocha Liatha/Greystones confusion, there was an instant thaw and a friendly connection. “Na Clocha Liatha - what the f**k is that s**t all about?” he said. I patiently explained the languages we used in this country and how the buses and trains and signposts sometimes use the Irish language version of a place name.

West wasn’t letting this go. “But what about the tourists who come here? What if that had been me wanting to go this Greystones place and I see the wrong name on the train I’m supposed to be getting?”.

With a bit of a run-up, he did make a very good stab of saying “Na Clocha Liatha” while also noting that the use of the Irish language version of Greystones on trains was “some stupid s**t”. That’s decisive decision making right there.

Though voluble on the Na Clocha Liatha issue, he was stunned into silence by the arrival of two full Irish breakfasts on our table. “I recognise the tomato and that’s about it,” he said. I led him on a tour of the plate as he nodded in belated recognition of the various foodstuffs. He was quite keen on receiving supplementary background information on “those round things” - the black and white pudding.

He stared intently at this formidable array of Irish fried cuisine for a few minutes before proceeding to demolish it in five minutes flat. This is not a man of ideological inflexibility - though slightly shocked by the appearance of the full Irish breakfast, he asked for advice and guidance on the issue before coming to an informed decision.

In the light of his recent controversial pro-Trump comments, what he had to say about his own political beliefs during the interview are revealing. At the time West was being hailed as the “conscience of the music world” for speaking out against racism and social injustice.

“But that’s just the voice of my father coming through me” he explained. He talked about how his father, Raymond West, had been a prominent member of the Black Panther movement - a “black power” political grouping active in the US in the mid to late 1960s who are perhaps best remembered now for being paraded at white liberal intelligentsia dinner-parties

“All the stuff I say about ‘society’ comes from my father” he said. “I remember my father driving me around when I was a kid and he’d be beating me over the head with all his talk about ‘politics and society’. But, you know, I was brought up middle-class. I was always more into fashion that I was into politics.”

He wondered if the fact that he wasn’t politically switched-on would disqualify him from high political office. I told him that that he would be a better candidate for the US presidency than both the names being talked about at the time - Jeb Bush and Hillary Clinton. The die, it appears, was cast in a Dublin hotel lobby.

Kanye West in An Teach Bán? With the full Irish breakfast on the menu.