Is Trump being played by Kim Jong-un? 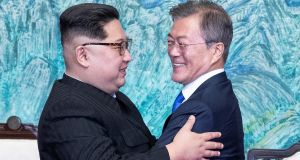 As the historic meeting between the leaders of North and South Korea concluded, the two men raised their clasped hands together in triumph before toasting the achievement with champagne. The moment was welcomed with a joy approaching ecstasy in Seoul. While few looking on that day held out the prospect of the militarised border along the 38th parallel suddenly crumbling like the Berlin Wall, it was clear that a new era of trust had begun. “The sun is rising at last for national reunification, reconciliation and peace,” said the South Korean president.

All of the above is taken almost verbatim from An Irish Times report published on June 15th, 2000, the day after the then president of South Korea, Kim Dae-jung, travelled to Pyongyang for a landmark meeting with his northern counterpart, Kim Jong-il. In that same year, Madeleine Albright became the most senior United States official to visit North Korea since the 1950-1953 Korean war, and the US and North Korea began a talks process aimed at preventing the development of nuclear weapons on the peninsula. Before the year was out, Kim Dae-jung won the Nobel Peace Prize.

The parallels with today are striking: in a moment freighted with hope, the world in 2000 was gripped with a sense that the Korean peninsula was edging towards a settlement. The same sense of optimism infused coverage of the meeting in the demilitarised zone last week of Kim Jong-un and Moon Jae-in and preparations for the upcoming summit between Kim and President Donald Trump.

As we now know, of course, the optimism of 2000 would quickly fade. The talks trundled on for the remainder of Bill Clinton’s presidency, but the revelation that North Korea was working to enrich uranium prompted the George W Bush administration to repudiate the effort, and in 2002 Pyongyang expelled international inspectors and restarted its nuclear facilities.

We’ve been here before, in other words. The diplomatic history of the past half-century is filled with joint statements that included similar vague promises to those agreed at Panmunjom last week. Each of these initiatives went nowhere, largely because on every occasion North Korea reverted to its reflex provocations. A cycle is well-established: faced with some internal or external pressure, Pyongyang agrees to talks on its nuclear programme, banks the benefits (usually in the form of cash, food or a relaxing of sanctions) and then pulls the plug. It’s easy to lose sight of it, amid so much unquestioningly positive framing of last week’s events but, if history is any guide, the latest rapprochement is far more likely to fail than to succeed.

A cycle is well-established: faced with some internal or external pressure, Pyongyang agrees to talks on its nuclear programme, banks the benefits and then pulls the plug

Of course, it’s inarguably a good thing that Seoul and Pyongyang are back on speaking terms, and that Trump, who just months ago was threatening to unleash “fire and fury” on North Korea, is invested in negotiations. If those talks lead Kim to abandon his nuclear arsenal, Trump will have succeeded where his predecessors failed.

We may never know for certain what caused Kim’s stance to shift. Up until recently, the 34 year old’s default position has been extreme belligerence. He has tested almost 90 ballistic missiles – three times more than his father and grandfather combined – and carried out four of North Korea’s six nuclear tests. Since a new year speech in which he broached talks with the South, however, Kim has taken every opportunity to signal a readiness to talk.

It could be, as Trump’s supporters argue, that the US president’s threats, along with his wildly unpredictable nature, has spooked Kim into seeking a deal. Or perhaps the pain from sanctions has pushed him towards the negotiating table.

Just as likely, however, is that Kim is doing what his father did before him and using the prospect of talks to buy time and entrench his rule. Read his statements closely. He has spoken of closing one nuclear test site, but has never said he will give up nuclear weapons. Indeed, the prospect of a meeting with a US president – something successive leaders of North Korea have sought, but which only Trump conceded without getting anything in return – will give Pyongyang a propaganda boost, showing it precisely what status nuclear weapons can bestow.

The prospect of a meeting with a US president will give Pyongyang a propaganda boost, showing it precisely what status nuclear weapons can bestow

For Kim, a long-running talks process removes the threat of a pre-emptive strike by the US while not requiring him to make any concessions on the nuclear arsenal or human rights. He will be feted as a statesman and, as relations improve, he will be able to argue quite reasonably for two of the Kim dynasty’s long-cherished goals: the end of sanctions and the departure of the tens of thousands of US troops stationed on the Korean peninsula.

One side appears to be acting strategically here, and it’s not Washington. It’s hard to shake off the suspicion that Trump, the self-proclaimed deal-maker, is being played by a man half his age.