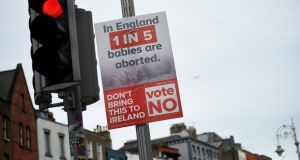 Anti-abortion poster in Dublin: If the referendum is passed, the path to reform of Ireland’s abortion laws will still be far from straightforward. Photograph: Clodagh Kilcoyne/Reuters

No election or referendum, especially a referendum in this country, is a foregone conclusion until the votes are counted, but last week’s Irish Times opinion poll suggests that the Yes side is firmly in the driving seat in the abortion referendum campaign.

Our poll was mirrored in a Sunday Times poll published a few days later and in private research conducted in recent weeks.

Nothing is set in stone; the future is yet unwritten. The race is likely to tighten over the coming weeks, and it is possible for the No side to turn it around. There remain many undecided voters as well as unhappiness and uneasiness among soft Yes voters; referendums, remember, have an in-built bias towards the status quo, with undecideds usually breaking towards the conservative position.

But while all this is possible, the real question is how likely it is to turn the campaign around from its existing trajectory. The answer to that is that it is quite unlikely at this stage.

But if the referendum is passed, the path to reform of Ireland’s abortion laws will still be far from quick or straightforward. A long parliamentary and political battle will lie in store.

The Government’s intention is to bring in the abortion legislation in the autumn. This would allow time for drafting, and for a slow and careful consideration and debate by the Oireachtas. It is likely that the pre-legislative scrutiny phase at the health committee would hear evidence from doctors, abortion service providers, health officials and so on, before the actual text is drafted, people familiar with the process tell me. That will extend the timeline well into the autumn.

But the deteriorating relationship between Fine Gael and Fianna Fáil, the consequently dimming prospects for an extension of the confidence-and-supply agreement and the fact that this means an election now appears in the mid-distance cast doubt on that timetable.

Ministers are coming to the realisation that this legislation may not fall to this Dáil at all – because an election may arrive before it passes through the Oireachtas.

Is there any chance of the legislation passing by the summer, as Sinn Féin has suggested? I asked one person who knows; his reply: “absolutely no chance”. I am told that the Cabinet has no expectation of bringing the legislation to the Dáil before the autumn.

The Dáil will return in mid-September and pass a budget in mid-October. After that, with the confidence-and-supply agreement expired, we are in election territory. In those circumstances, the chances of abortion legislation getting through the Dáil are highly uncertain, to say the least.

You don’t have to be a student of politics to realise that this raises the prospect of a general election in which candidates’ attitudes to abortion and especially the proposals to introduce abortion on request up to 12 weeks will become an important question.

Some in Government fear that such an election could see a raft of overtly anti-abortion candidates elected. Their fears are overblown. Pro-life organisations have been trying to get TDs elected since 1992, and they have never succeeded. If they couldn’t get one into the Dáil when the country was a lot more opposed to abortion than it is today, they’re not going to get one elected in 2018. Many voters are certainly anti-abortion – but relatively few believe it is the most important reason for voting.

Some in Government fear that such an election could see a raft of overtly anti-abortion candidates elected. Their fears are overblown

But there are anywhere from a few hundred to a few thousand of such hardline anti-abortion votes in every constituency, depending on where it is. So where do they go? There may well be single-issue, pro-life candidates, but they won’t be elected. Instead, I expect the votes are likely to transfer to the most pro-life Fianna Fáil candidate in the constituency – and there are plenty of them – but only once cast-iron assurances to vote against the abortion legislation were supplied. How ironic if these anti-abortion votes were to deliver an electoral boost for Michéal Martin.

One of the things that the political class has been slow to wake up to is how elections are becoming separate to the process of government formation. There are, in a sense, two processes – related, though distinct.

As our politics becomes more fractured – and more typically European – elections will cease to be followed immediately by the election of a taoiseach and the nomination of his or her government.

Looking at the polls, there will be no obvious government. Instead, a (probably lengthy) period of government construction will then ensue where Fine Gael and Fianna Fáil both try to assemble the numbers for a majority, or, failing that, an arrangement which allows them to govern. That could take – as it did the last time – some months. And the fate of the abortion legislation will undoubtedly be part of that horse-trading.

It is certainly true that the passage of the referendum (if that is what happens) would change the political context for the abortion legislation. The will of the people is, after all, the highest authority.

But the passage of the referendum by – say – 55 per cent to 45 per cent would still demonstrate a large minority of voters opposed to the proposed abortion legislation. Anti-abortion TDs would feel entitled to campaign and vote against the legislation. They would probably be enthusiastically supported by the organisations currently mobilised to oppose the referendum.

All the above scenarios, of course, are uncertain. But I think they are likely. The great abortion debate is gathering pace ahead of the May 25th vote of the people. But in the matter of reforming Ireland’s abortion laws, that may be the beginning, rather than the end, of the story.

1 A vegetarian and a non-drinker visit Ireland: here’s their verdict
2 Eyewitness to Auschwitz: ‘We were held in the wagons like animals’
3 Is Ireland moving left or simply moving on?
4 Dublin ranks 120th out of 150 cities for raising a family
5 Who are Ireland’s 17 billionaires?
Real news has value SUBSCRIBE