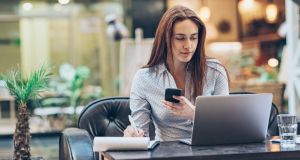 Women and the law: complex social and structural rules lie behind why women do not have the same progression rates as men.

An analysis of the Law Society of Ireland Law Directory entries from 2013-2017 for the six largest law firms in Ireland shows that some progress is being made in gender equality at senior levels of the solicitors’ profession but there is yet more to be done.

The data shows that in February 2017, on average, 67 per cent of the partners in the six firms studied (A&L Goodbody, Arthur Cox, Matheson, McCann Fitzgerald, William Fry and Mason Hayes & Curran) were men.

According to official Law Society of Ireland statistics on the number of practising certificates issued in 2017 and 2016, 14 per cent of all practising solicitors work at these six entities. These firms reputedly pay the highest remuneration of all firms to their staff and partners.

If 67 per cent of partners – the most senior and best-paid solicitors at these firms – are men, then there is likely to be a significant gender pay gap in terms of the average hourly and bonus pay for men and women across the practising solicitors in the firm.

To put this 67 per cent figure in context, women have been entering the profession in greater numbers than men for the past 20 years. The number of women working as solicitors across the entire profession has exceeded the number of men since 2015. The most interesting figure is that, on average, 64 per cent of the solicitors working below partner level at these firms are women.

Those that disagree with contentions of structural inequality would say that partners are promoted on merit, there is equality of opportunity (even a bias in favour of women as they make up so many of the non-partner lawyers) and there are no barriers to women making partner if they put in the hard work.

However, to say that women do not make the grade after years of making the grade up to the point of entry to law firms is a nonsense. To say that somewhere along the line, the ambitious, intelligent and career-driven women entering the firms decide that they no longer want to reach the top of the career ladder for mysterious reasons of their own, smacks of Shakespearean ideas of the fickle woman.

That there is a complex set of social and structural rules present in law firms, as across society, provides a much better answer to the question as to why women do not have the same progression rates as men.

Generally, structural inequality analyses will concentrate on factors such as the unsuitability of the long working hours prevalent at law firms when rearing children or caring for family members, compounded by the responsibility for such matters being disproportionately carried by women. Other commonly mentioned factors are unconscious bias, harassment or discrimination against women.

It may yet be subtler. Women are not oblivious to the environment in which they work. Surely for a female associate to look around and see more women than men at non-partner levels and almost the opposite gender distribution at senior levels must be disheartening.

These six law firms may be losing out on good partners because they cannot keep women engaged to work in a system weighted against them.

The good news is that there is already movement in the right direction. Hiring patterns over the period studied show that the overall increase of 16 per cent in the number of partners in these firms has resulted in, on average across the firms, an equal number of women and men promoted.

The data shows that the profession is moving in the right direction but at the current rate of change, it will be another 15 or 20 years before there is gender parity at senior level

This is indeed an improvement but it could be expected new appointees to partner level over the period studied would reflect the gender distribution at non-partner level. This would result in women making up 64 per cent of partner appointments. It is closer to 52 per cent.

Qualifying the evidence of improvement is also the degree of variation in the individual practices of firms.

A&L Goodbody has increased the number of female partners by 60 per cent since 2013, but this comes from a situation where, in 2013, they had the lowest percentage of women at partner level within the six firms analysed at 24 per cent. In 2017 they were located in the middle of the distribution.

The data shows that the profession is moving in the right direction but at the current rate of change, it will be another 15 or 20 years before there is gender parity at senior level, despite the greater numbers of female solicitors at non-partner level.

For female solicitors currently working within these firms, this is a very long time to wait for equality.

Elizabeth Fitzgerald is a solicitor