Doping in sport: too good to be true 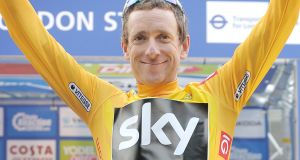 Following publication of a British parliamentary report on doping in sport, Tour de France winner Bradley Wiggins queried the methodology of the report and told the BBC “I’d have had more rights if I’d murdered someone”. Photograph: Tim Ireland/PA Wire.

It doesn’t seem that long ago since Bradley Wiggins won the cycling time trial at the London Olympics, sitting on a royal throne awaiting his gold medal – days before Mo Farah completed a distance running double on the track, after which Sebastian Coe was lauded as the man who organised the best Games in living memory. Did it feel a little too good to be true?

Less than six years later that question now carries serious weight. Wiggins, Farah and Coe are the three central names in the British parliament’s Digital, Culture, Media and Sport (DCMS) committee’s report into doping in sport, with varying degrees of damage to their reputations.

It suggests Coe may have turned a blind eye to allegations of systematic doping in Russia, most of which have turned out to be true (in his current role as IAAF president, the governing body of world athletics, Coe is one of the few heads of sport to impose a ban Russia). Farah also comes under scrutiny after he received an injection from a UK Athletics doctor which although legal may still have broken anti-doping rules.

Wiggins, Britain’s first winner of the Tour de France and one of its most decorated Olympians, appears to have sustained irreparable damage to his reputation, as indeed does his former cycling team, Sky. The 50-odd pages of the DCMS report essentially accuse Wiggins and Sky of cheating – or “crossing an ethical line”, as MPs put it – by using substances which, although allowed under anti-doping rules for medical purposes, were taken solely for performance enhancement.

There is some element of doubt, given the accusations are partly based on an anonymous source, but it doesn’t look good. Team Sky sold itself on transparency, and yet the report highlights its “serious failure” to keep basic medical records, deeming this “unprofessional and inexcusable”.

Wiggins has come out fighting, questioning the entire methodology of the report and telling the BBC “I’d have had more rights if I’d murdered someone”. Part of his problem is that in the world of modern sport, if something seems too good to be true then it usually is.

1 Aaron Brady, the man who said with pride he was a cop killer
2 Coronavirus: 40 new cases and one more death confirmed by Nphet
3 House seized by Cab from Liam Byrne petrol bombed after being rammed by car
4 Aaron Brady found guilty of capital murder of Det Garda Adrian Donohoe
5 Brutalist beauty in Brittas for €495k
Real news has value SUBSCRIBE