Laity are revolutionising faith practice in the community 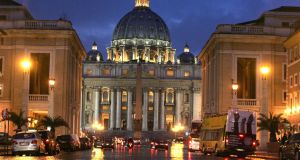 There is a small, quiet revolution taking place within the Catholic Church right now that is not likely to please some. However, it has interesting potential for an organisation crumbling under the weight of its own deceit.

People who have been totally alienated from the Roman imperial model of church are still seeking to express their Catholic faith within community, because they truly understand this is most authentic place for faith practice.

They are finding this community, which may or may not include priests, not in the formal structure of church but in homes. This is happening in various parts of the country and is an actual embodiment of the domestic church – the root from which our church grew initially.

Such eucharists are necessarily private because the participants are not interested in controversy. They desire simply to meet in community, share their faith, give thanks and ask blessing.

The strength of this model of church is that it is truly a grass roots initiative. This is not especially strange or innovative – it mirrors the early church when the first Judaic Christians started to draw together and live the new way.

But we don’t have to go back to the first two centuries of the Christian era to find precedent. Such small communities flourished in Latin America in the 1970s and 1980s until John Paul II, with the assistance of the curia at the Vatican, systematically targeted the leaders of these base groupings, reducing their effectiveness in building communities of the faithful.

The appearance of this type of community is also a timely reminder for the academics and clerics as to whom theology is meant to be directed. Theology that nestles in the realm of Greek philosophy, and ceases to have relevance for the joys and sorrows of the lives of the faithful, is an indulgence.

A fruitful conversation between what we might call “vocational” (a more apt term than “professional”) theologian and the community is more likely to arrive at insights that make sense for the faith communities and theologians alike.

Vocational theologians, on their own, risk doing theology that is irrelevant to real lives, and community without a sense of tradition may lose its way.

This is the strength of these new eucharistic communities – many members are well-formed in adult faith, many have taken courses in adult faith education, some have formally studied theology. There is a variety of experience bound together by a deep desire for faith within community.

So while church leaders bemoan lack of “vocations” (read: male and celibate), there is a small but significant set of communities acting in a truly prophetic way. This evangelisation can be welcomed and appreciated for the authenticity it can bring to the church, or it can be vilified and rejected.

These people in this quiet revolution are excited by having Francis as bishop of Rome, but they are not waiting to be micromanaged by an individual pope’s personality.

They are gatherings of people in faith, working out what it means to follow Jesus, the Christ, and to make the world a more just place for our fellow human beings made, as they are, in the image and likeness of God.

These groups are not so much about the shortage of priests as the paucity of vision in the church generally and in Ireland particularly.

Though Paul VI will be most likely remembered for the error of judgment that was Humanae Vitae, the encyclical published in 1968 which sustained the church’s ban on artificial means of contraception, one of his best documents is Evangelii Nuntiandi, which was promulgated on the 10th anniversary of Vatican II’s closure.

Francis’s apostolic exhortation Gaudium Evagelii takes a similar path. Both documents offer a praxis approach to evangelisation – meeting people in the reality of their lives, in their context.

But unfortunately, despite the fine words, meeting people in their life settings is still overruled by a theology that is fundamentally based on pre-Christian Greek philosophy and Roman imperial government.

A contextual, local theology fits with the tradition of the church, for what was the early church but contextual? It adapted to the Greco-Roman world and absorbed its philosophical tradition.

It is long past time to move on from that. These quietly flourishing domestic churches can point the way.

Angela Hanley is author of Whose à la Carte Menu?: an Exploration of Catholic Themes in Context, Justified by Faith: an Irish Missionary Experience in Malawi, and co-editor (with Dr David Smith) of Quench not the Spirit, a book of essays to honour the late Fr Seán Fagan