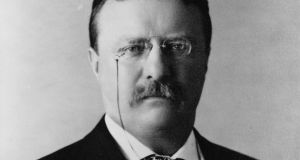 Theodore Roosevelt: His 50-page speech was in his inside pocket, along with his glasses. These items, and his thick coat, slowed the passage of the bullet and most likely saved his life.

Some speeches should never be made. You know those ones that start with: “Unaccustomed as I am to public speaking”. Or: “I’m going to take you through the 75 almost-imperceptible changes to our client data-management policy”.

But what about those brilliantly written speeches that were never delivered? Such as the speech written for President Nixon in 1969. “In Event of Moon Disaster” was prepared in case Michael Collins had to return to earth without Neil Armstrong and Buzz Aldrin.

“Fate has ordained that the men who went to the moon to explore in peace will stay on the moon to rest in peace,” speechwriter Bill Safire wrote for the US president in the haunting statement. “These two men are laying down their lives in mankind’s most noble goal: the search for truth and understanding”.

At the end of the speech is a note saying the president should telephone each of the widows-to-be before delivering it.

Happily, the speech was never needed but it must have been chilling for the astronauts to later read how their deaths would have been announced, had the mission failed.

The statement is contained in Speeches of Note, Shaun Usher’s compilation of extraordinary speeches. Most of the speeches were delivered as intended, but a few were not. The unspoken speeches include one prepared for Queen Elizabeth II, in the event of World War III breaking out.

It was written in 1983 when relations between the West and the USSR were rapidly deteriorating and US president Ronald Reagan was proposing his “Star Wars” ballistic missile defence system. Nato simulated an exercise in the event of a nuclear escalation and British officials also carried out exercises to see how prepared they were. The “Message to the Nation” was one such exercise.

The address recalled how she had last addressed her subjects at Christmas. “The horrors of war could not have seemed more remote as my family and I shared our Christmas joy with the growing family of the Commonwealth. Now this madness of war is once more spreading through the world and our brave country must again prepare itself to survive against great odds,” it read.

The since-disgraced Prince Andrew was in military service at the time and the speech noted this: “My beloved son Andrew is at this moment in action with his unit and we pray continually for his safety and for the safety of all servicemen and women at home and overseas.”

The speech went on to implore people to look out for each other. “Help those who cannot help themselves, give comfort to the lonely and the homeless and let your family become the focus of hope and life to those who need it,” the queen would have said.

It is our good fortune that she never needed to call on those words.

And it was Theodore Roosevelt’s good fortune that he was about to deliver a very lengthy speech when he was shot by John Schrank in 1912. He was campaigning to serve a third term as US president and was carrying his 50-page speech in his inside pocket, along with his glasses. These items, and his thick coat, slowed the passage of the bullet and most likely saved his life. The bullet still entered his chest wall but, remarkably, this didn’t stop him from delivering his speech.

That speech is also contained in Speeches of Note, as is a photograph of the speech with the bullet holes visible. “I don’t know whether you fully understand that I have just been shot; but it takes more than that to kill a bull moose,” he told the crowd in Milwaukee. “The bullet is in me now, so that I cannot make a very long speech, but I will try my best.”

And try he did. In fact, he delivered a speech that reportedly lasted a whopping 84 minutes. The audience must have been grateful to get the short version.

It was only after he had delivered his speech that he was examined by doctors. They decided to leave the bullet in his body as it was deemed too risky to remove. Unfortunately for Roosevelt, getting shot wasn’t enough to propel him back to the White House – he came second to Woodrow Wilson.

Perhaps he might have won if he had delivered shorter speeches. Although he would still find it difficult to be as succinct as Salvador Dalí.

In what must be one of the world’s shortest speeches, the surrealist artist once addressed a press conference thus: “I shall be so brief that I have already finished.”

And he promptly sat down.