Leaving Cert fiasco is going to get worse

Not only are the calculated grades a debacle, the Leaving Cert exams designed as an alternative are unfair, too 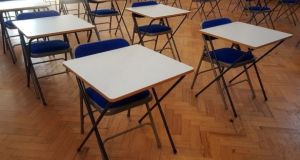 If the calculated grades delivered to the class of 2020 were a verdict in a court of law, they would be set aside as unsafe. Photograph: The Irish Times

The errors made in relation to calculated grades – errors with far-reaching consequences – have meant that the arrangements for the Leaving Certificate examinations in November have received little scrutiny.

Leaving Cert students were offered the opportunity either to accept their calculated grades or sit the examinations and defer going to college. They can also choose the best combination of both calculated grades and exams. Having seen the proposed timetable for those exams which was released late last week, the only conclusion is that they are designed to discourage young people from sitting them at all.

The examinations take place in the evenings and at weekends. The first exam is biology, a very demanding subject, starting at 5:30pm and ending at 8:30pm on Monday, November 19th. In evenings of the first week, there will be exams in geography, French, business and history. But the real killer is that this is followed by both English papers on Saturday and by both exams in maths on Sunday.

For years, paper one and two in English have been on different days in order to have mercy on students’ poor, cramping hands. The first paper takes three hours and 20 minutes while the second takes two hours and 50 minutes.

The justification is probably the presumption that students will only take one or two subjects, but what is that based on? The only students taking the examinations will be the highly motivated students who missed out on courses that they really, really wanted.

They are quite likely to take four or five subjects. These students will have been studying alone for months. That takes tremendous grit and courage. The least they deserved was a decent timetable.

Furthermore, these and other students may already be victims of another injustice. There are a number of students who received higher grades than they were actually entitled to, due to the two errors discovered thus far in the calculated grades process. The practice, which I support, is that no student is downgraded due to system error.

These higher grades will have had a particular impact on highly competitive courses – precisely the kind of courses for which students would be willing to sit exams in even more stressful than usual conditions.

For example, unlike previous Leaving Certs, those who sit the November exams will just receive marks for the written component in some subjects because orals and music performance tests were cancelled.

And now the burden of the running of the examinations has been foisted on individual schools. Normally, State exams happen outside term-time and supervision is organised externally, not by the school.

Every square centimetre in schools is currently being utilised for teaching in order to achieve social distancing. So after a full day of teaching, schools will have to set up examination centres, including separate rooms for those entitled to them due to needing a scribe or other accommodations, then dismantle them after 8:30 at night, deep clean them for classes the next day, and potentially go on doing this for four weeks.

Much of the burden will fall on management who have already been working flat out to ensure that schools could open, stay open and keep coronavirus at bay. Some teachers will be teaching all day and organising or supervising in the evening or collecting exam papers on Sundays. Schools expected practical external help with organising exams but yet again have been told to just get on with it. It is poor thanks.

Many teachers already feel betrayed because they were promised that the ranking of their students would remain private except in exceptional cases. No teacher thinks of, say, a heroically hard-working student, as the 12th or 23rd best student in a class. Teachers reluctantly acquiesced in ranking them because they were told that it was the only way the algorithm could be fair.

Then the rankings were opened to every student, including very vulnerable individuals. It was a gross breach of trust. Teachers are now being asked to supervise their own students for State exams which normally never happens, another breach of the relationship between teacher and student.

Not only are the proposed exams unfair, but confidence in the calculated grades has also been fatally undermined. We saw identical twins on RTÉ news, Aaron and Conor Daly, whose teachers ranked them as equally academically gifted. One got his first choice, medicine, and the other got his sixth choice. How is that possible? It is hard to explain it away by two errors in the coding process. If the calculated grades delivered to the class of 2020 were a verdict in a court of law, they would be set aside as unsafe.

The only good thing that may emerge from this debacle is that calculated grades will probably never be used again.