They are lighting Ruth Bader Ginsburg votive candles now, but it could have been so different 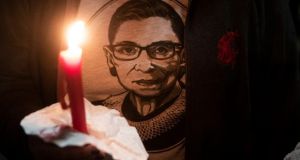 Ruth Bader Ginsburg was considered too tame and too incrementalist for the feminists of the 1990s.

Votive candles adorned with Ruth Bader Ginsburg’s image have been for sale for a long time and represent just one of the quasi-religious objects people buy in her honour. (The others include onesies with the inscription, "The Ruth will set you free".)

Votive candles are a Christian practice. One that I saw had a cross emblazoned on the diminutive judge’s chest. The lack of cultural sensitivity is painful. Ruth Bader Ginsburg, although not a particularly observant Jew, was profoundly shaped by Judaism.

“I am a judge born, raised, and proud of being a Jew,” she wrote in a 1996  essay for the American Jewish Committee. “The demand for justice runs through the entirety of the Jewish tradition. I hope, in my years on the bench of the Supreme Court of the United States, I will have the strength and courage to remain constant in the service of that demand.”

In the same essay, she wrote: “The Biblical command: justice, justice shalt thou pursue” is a strand that ties them together. I keep those words on the wall of my chambers, as an ever-present reminder of what judges must do ‘that they may thrive’.”

Of course, votive candles with secular subjects are often heavily laced with irony or are designed to undermine the tradition that they are appropriating. The Five15 online shop offers Ruth Bader Ginsburg modelled on St Therese of Lisieux, not to mention Jonathan Van Ness as Jesus with a hairdryer.

But you still get the impression that the devotion to Ruth Bader Ginsburg is more sincere than it is ironic. She was a pioneering woman with many admirable qualities, so there are many excellent reasons why she would become an icon.

However, she was far from an iconic figure when she was appointed to the Supreme Court. In his book, The Nine: Inside the Secret World of the Supreme Court, Jeffrey Toobin says that Ginsburg arguably was Bill Clinton’s seventh choice.  Clinton wanted the mercurial Mario Cuomo, then governor of New York, who agreed twice and then withdrew.

When Daniel Patrick Moynihan, the towering Irish American Democrat senator, started pushing Ginsburg’s cause, Clinton was worried about picking her and confided in Moynihan, “the women are against her”.

The women in question were feminists. In historian Jane Sherron de Hart’s biography of Ruth Bader Ginsburg which was fifteen years in the making, she states that “from the standpoint of some in the legal academy and the [feminist] organisational trenches, the pioneering sex-discrimination strategist and litigator of the 1970s, had by 1993 morphed into an outmoded supporter of formal equality, safely ensconced behind the bench and outside the fray”.

RBG was considered too tame, too incrementalist, especially since she sometimes chose to represent men, for example, in securing widowers’ pensions. The fact that she had wiped some 200 laws off the statute books that discriminated against women was not sufficient for the feminists of the 1990s.

Ginsburg was considered unsound on abortion because she had voiced the opinion that in Roe v Wade, another object of quasi-religious devotion, the Supreme Court had overreached itself by not allowing the states to dismantle abortion legislation incrementally.

She was also considered suspect because of her disputatious and firm friendship with Antonin Scalia, known for his conservative jurisprudence and worldview. (He was confirmed 98-0 to the Supreme Court. Bader Ginsburg was confirmed 96-3. Such different times, when overwhelming talent could be the deciding factor.)

From my viewpoint, the tragedy is that she chose the binary option when it came to abortion

What changed Clinton’s mind about Ginsburg? In part, it was a desire to appease Moynihan but even more importantly, it was Ginsburg’s husband, Marty’s incessant lobbying on her behalf that gradually built support for her among opinion-formers.

Theirs was an inspirational relationship of love and equality. Marty cooked and was as hands-on in raising their two children as his wife was.

There is much to admire about Ruth Bader Ginsburg.  Women have many reasons to be grateful to her. However, from my viewpoint, the tragedy is that she chose the binary option when it came to abortion – either you were for women and supported abortion, thereby denying justice to those not yet born, or you were for justice for the next generation and therefore could not support women.

Imagine if she had chosen the non-binary option – it is possible to build a world where it is not either/or but both/and. It is possible both to support women in their uniqueness and diversity and also offer justice to those who have no voice except that raised on their behalf by those already born.

Imagine if Ginsburg’s laser-like mind had been focused on persuading others that both lives matter. I like to imagine the blaze of light that might have followed the lighting of that particular candle by such an influential woman. Sadly, it would probably just have meant no votive candles, no onesies with her name, and demonisation rather than secular sainthood.

1 Large crowds gather on Dublin’s Grafton Street on eve of lockdown
2 200 Irish retailers for all your online Christmas shopping
3 Coronavirus: Three further deaths and 1,066 cases reported in Republic
4 Level 5 golf shutdown: Ireland one of few countries to close courses
5 People will need to get used to a ‘simpler life’ because of Covid-19, says prominent medic
Real news has value SUBSCRIBE