The Irish Times view on the Ipsos/MRBI poll: a public desire for health investment 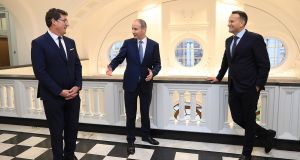 Given the enormous implications of the Covid-19 pandemic, it is no surprise that more spending on health is the top priority for voters, according the latest Irish Times/Ipsos MRBI opinion poll. When asked to pick which one of five options should be a priority for extra Government spending in next week’s Budget, 42 per cent of respondents opted for additional health expenditure.

The next priority was more spending on the construction of new houses, schools and other infrastructure, which was chosen by 32 per cent. The other three issues on the list ranked far behind with 12 per cent opting for more business supports and grants, 6 per cent for higher welfare payments and just 4 per cent for green initiatives.

Down the years health has almost always featured as the priority in opinion polls and while it is debatable whether it is always uppermost in the minds of voters when it comes to elections, there is clearly wide public support for prioritising expenditure in the area in the current climate.

The Covid-19 emergency has focused the public mind on the need to invest in the health service to ensure that it is capable of meeting the challenges facing it in the years ahead. Conversely, the low priority accorded to improving social welfare payments may be some relief to Minister for Finance Paschal Donohoe as he struggles to juggle scarce resources.

When it comes to tackling coronavirus, the positive news for the Government is that a solid majority believes it is doing a good job. The strongest support comes from Fianna Fáil supporters. Fine Gael voters are not quite as enthusiastic while Sinn Féin voters are, unsurprisingly, the most critical. In age terms the over 65s are most supportive of what the Government is doing.

Although a majority believes the coalition is handling the pandemic well, there is no unanimity about the level of restrictions that should be in force. While 45 per cent of the electorate believes that the current restrictions are about right, 32 per cent think they don’t go far enough while 21 per cent believe they go too far and are doing unnecessary damage to business and the economy. Given these views it would appear that the coalition is in tune with a majority of the electorate in rejecting the advice of Nphet to move to a Level 5 lockdown but there is a significant minority in favour of further restrictions.

It is interesting that there is no major difference between the young and the old on the issue. It is a welcome sign of social solidarity that those who are not threatened by the virus are as much in favour of restrictions as those who are most vulnerable.

Maintaining that solidarity in the period ahead will be the challenge given the significant minorities who believe the current regime is either too restrictive or not restrictive enough.