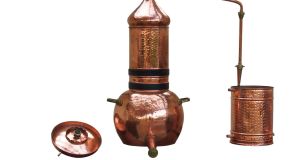 “She had taken matters into her own hands, setting up a small distilling operation which had, eventually, come to the notice of the forces of law and order”

In these torrid times for the licensing trade, the shebeen seems to have been making a reappearance – of sorts. It is not so long, however, since not only the illegal sale, but the illegal distillation, of spiritous liquor was an urban as well as a rural phenomenon, facilitated by the creation of the portable gas cylinder and burner, which of course was also much easier to conceal than the presence of a turf fire in the environs of a rural cottage.

The same technology was in use in inner-city Dublin a few decades ago and, for all I know, may still be in operation.

Nor, of course, is this a uniquely Irish phenomenon. In the company of a French journalist, I was once taken to a remote farm in the massif central where a large lemonade bottle full of a colourless liquid, and described obliquely only as “la chose”, could be purchased for a very modest sum.

I was assured that the practice of rural distillation in these inhospitable regions was generally tolerated by the constabulary.

This was because, as long as it was primarily for personal consumption, and given that the farmers needed something to fortify themselves either before, during, or after searching for their animals on the snow-covered mountains, it ranked among the prime necessities of life.

We took it back to Dublin, added some sloes to it, put it in a cupboard and forgot about it for a year or so.

Rediscovered, it had transformed itself into one of the best liqueurs we had ever tasted.

While legal considerations preclude going into any detail about more recent events that have attracted attention, there’s nothing to prevent a bit of reminiscence about the distant past when not only the sale, but the manufacture of illicit alcohol was a thriving sub-industry, not least in the west of Ireland.

When I worked on this newspaper some decades ago, a reporting assignment brought me to Galway where I met, by chance of course, a local journalist in one of the city’s pubs.

One story led to another, and another, and it wasn’t long before he was telling me about a recent assignment to cover a news event on an island off the Connemara coast.

The island was small, and supported only one family, headed by an imposing matriarch who had been the leader of the clan since her husband’s death some years earlier.

On the mainland, there were many public houses owned and run by widows, who had inherited seven-day licences from their deceased husbands as a sort of supplement to the widow’s pension.

No such good fortune was available to the widow of a fisherman on a small island, and so the bereaved had taken matters into her own hands, setting up a small distilling operation which had, eventually, come to the notice of the forces of law and order.

My colleague accompanied the gardaí to the island “in the course of their duties”, as they would say in court, and remained at a discreet distance while the constabulary went off a short distance to do the self-same duty.

Traditionally, this would have involved not only pouring way any liquids found at the site, but also the physical destruction of the boiler and the copper “worm”, the latter being a corkscrew-like tubular appendage, a piece of hardware essential for the completion of the distillation process.

Although the raiding party was equipped with a sledgehammer for this operation, my colleague realised that the sounds that would normally have accompanied this act of physical destruction were not to be heard.

Journalistic discretion persuaded him to keep this observation to himself until, with the raiding party, he was again on board the boat heading back to the mainland.

The garda thought for a moment, weighing up the possible consequences of alternative sources of action, before finally coming clean.