Kathy Sheridan: Let us look at who was not at that golf dinner 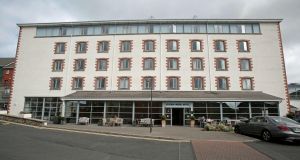 All through Saturday night into Sunday morning, news bulletins of the BBC World Service were focused on Colombian massacres, the assassination attempt on a leading Russian opposition figure, Donald Trump’s efforts to disenfranchise American voters, gross anti-Semitism in email exchanges between Islamic Relief Worldwide board members . . . and right up there in the billing, on a par with those catastrophes , was a headline about the recall of the Irish parliament on foot of a “scandal involving more than 80 lawmakers” and a golf club dinner.

The BBC World Service in English has about 300 million listeners. This global image of “more than 80 Irish lawmakers” assembled like latter-day Illuminati in an isolated hotel was blasted to the world at least every hour over that night. From the perspective of locked-down, compliant Kildare a few miles from Phil Hogan’s second Irish home, I thought of all the communal joys and mourning and truncated lives that our families, neighbours and friends continue to endure and sacrifice. And now, is this how we appear to the world? Is this the sum of us?

That depends. Who exactly were these 81 “lawmakers” aka “mostly political bigwigs” (thank you Reuters)? Nine of the people at that dinner would answer to the description of “lawmaker” as we understand the term. Two of them are members of the Dáil – one a Fianna Fáil TD now ex-minister, the other an Independent TD recently accused of racism in the chamber. Seven are serving Senators – four Fine Gaelers and three Fianna Fáilers – one of whom lost his leas cathaoirleach job while the others were cast into non-party darkness.

Any semi-sensate punter could have warned Séamus Woulfe that his patronising, disrespectful non-apology would compound the public rage

Nor did 53 out of 60 Senators. In other words 209 out of 218 Oireachtas “lawmakers” did not engage in the idiocy. Look again – was that a stellar turnout for an occasion boasting the “Oireachtas” brand? We can surmise how much of the low turn-out was down to Covid conscientiousness or to the poor pulling power of the long-retired/defeated politicians and guests who comprised the bulk of the attendance. A recent taoiseach and a long-ago tánaiste had the common sense to push off home after the golf.

The actual bigwigs present – in the form of the Supreme Court judge who had hardly settled into his new chambers and the EU commissioner deep in crucial EU/Brexit trade negotiations – have soundly thrashed their own reputations with no outside help. The whiff of arrogance is overpowering. Any semi-sensate punter could have warned Séamus Woulfe that his patronising, disrespectful non-apology would compound the public rage.

Phil Hogan’s detachment was so acute that he had to be invited to make a more “fulsome” apology, but ultimately as all Watergate aficionados know, the cover-up is often worse than the crime. The presence of Brian Hayes, ex-MEP turned chief executive of the Banking and Payments Federation, at a regulation-busting dinner surely presents a PR problem for an industry supposed to be in mortal combat with its woeful culture. And while Sean O’Rourke’s apology was sincere and self-aware, it was clearly not enough. It would be helpful to hear the views of a man who up to a few weeks ago was Ireland’s favourite quiet assassin of liars and dissemblers.

The problem for both O’Rourke and Woulfe is that they face not one but two separate charges: 1. a reckless breach of Covid-19 regulations and 2. carousing with politicians. The second lends a dangerous jagged edge to the first. It unleashes all the public worry, grief, anger and frustration that had no focus up to now. It refreshes suspicions of cosiness and worse – however unfounded – between various elites in a climate rife with mad conspiracy theories and contempt for the political class. It creates an outlet for a flailing, mostly fact-free trouncing of the mainstream media and politics: of O’Rourke’s presumed decent pension, of Dara Calleary’s remaining job and pension, of Hogan’s EU “gravy train”. It has triggered lazy comparisons of a small potatoes golf dinner with the notorious Galway tent.

For clarity: last week’s participants paid €140 a head for two days of golf, a hotel dinner and the chance of winning a George Foreman grill or a hairdryer. That totalled about €11,000 at best (less if special guests’ costs were covered by the society) and the event probably just about washed its face as the property developers and speculators who thronged the actual Galway tent might have described it. In the mid-2000s by contrast, the five-day Fianna Fáil shindig was clearing about €250,000. Its purpose was entirely party political, one of the party’s five key annual fundraising events.

Ministers were obliged to show up.

Socialist Party leader Joe Higgins was hardly embellishing when he wondered if government tax breaks managed to trickle down to those “multimillionaires who jet and helicopter their way from tax exile to tug the taoiseach’s sleeve, when, like an Arabian prince, he sets up his tent at the Galway Races each year”. The Taoiseach’s sleeve was certainly there to be tugged.

Yes, there is more to do but neither are we as bad as we think.

On Monday, Conor Lally reported that of the 177,350 new arrivals at the airport between July 1st and August 18th who were obliged to restrict their movements, calls were made to 33,021. Less than half answered their phones. That’s about 16,000 people who flew in from risky places, who are floating around the country and who, for some reason, ignored a call.