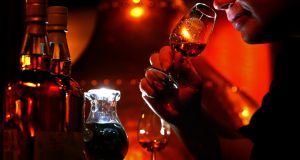 On Wednesday, a Bill will be tabled in the Seanad to end the ban on Good Friday alcohol sales, and has every chance of making it into law. File photograph: Jeff J Mitchell/Getty Images

One of my jollier assignments in 2010 was to roam around Limerick city pubs on Good Friday, chatting to rugby fans who were enjoying the fruits of the drink ban exemption, the first of its kind in 90 years.

The occasion was a mighty, sold-out clash between Munster and Leinster - with an evening kick-off at 8.05pm - and the notion of 26,000 mostly grown-up fans having to endure such an ordeal without alcohol on tap had preoccupied the nation for several weeks.

Scenarios were floated of angry, frustrated hordes roaming the streets with nowhere to go, in the absence of the kindly publicans.

And so Limerick vintners had gone to court to apply for an exemption and against opposition from the State and the Garda, they got one, making it legal to open on a Good Friday for the first time since 1927.

As a Munster fan with a coveted ticket, I was more concerned about losing the game than the chance of a beer. We lost, alas (though had a beer), but those dystopian images of a hypothetical Irish match day without alcohol still linger in the mind.

Limerick would be besieged. Hotels would be booked to the gills. Pub queues would stretch for miles. Staff would be overwhelmed

Even when the vintners got their exemption, that wasn’t the end of them. The drinkless scenarios were swiftly replaced by warnings of bacchanalian anarchy when gangs in fleets of mini-buses would descend on the city, crazed by the lure of an open pub.

Limerick would be besieged. Hotels would be booked to the gills. Pub queues would stretch for miles. Staff would be overwhelmed.

In the event, when the pubs opened at 6pm that Good Friday, four genial Kerrymen having a drink outside South’s said they reckoned the Good Friday drink ban should stay, and that the inappropriate match timing was all down to Rupert Murdoch and the television barons.

In another famous drinking house, a Leinster woman noted that the queue for the bar “was rather less than for the National Concert Hall”.

It was an eye-opener. For some reason, the fact that fans could legally sup alcohol inside the exempted Thomond Park stadium had been overlooked by the doom-mongers. But where had all those fearsome predictions originated? Who stood to benefit?

We know that Holy Thursday provides one of the biggest sales bonanzas of the year for off-licences. That’s bad news for publicans, obviously, for whom regular Friday trading accounts for nearly a third of their weekly business.

According to a 2016 DCU study, the Good Friday ban costs them €30million. So to protect and promote their interests, their lobbyists famously are woven into the political establishment.

Today, a Bill will be tabled in the Seanad to end the ban on Good Friday alcohol sales, and has every chance of making it into law. The move, as the proposer Senator Billy Lawless told the Sunday Times, resonates with a 2011 speech by Enda Kenny, “when he talked about the separation of Church and State”.

The fact that Lawless - a Chicago-based Taoiseach’s nominee to the Seanad- is a former president of the Vintners’ Federation of Ireland (VFI) suggests his Bill may not be entirely about supporting a secular state.

A current VFI officeholder, Jerry O’Dea, also a Limerick city publican and Fianna Fáil councillor, seemed mainly concerned for the poor tourists, claiming the ban was leaving them “very confused as to where they stand”.

Well, they would be standing in a country which bans alcohol sales on two days a year - and one of those is Good Friday. And even on that day, the law allows tourist-friendly exemptions such as alcohol with your hotel dinner, or in the railway station, or at the dogs, or the airport or on the ferry.

It’s also fair to say that many a confused and famished tourist in France, say, has gone looking for a nice lunch after 2pm, only to end up nibbling on a cheese roll from the French equivalent of Centra. But that hasn’t persuaded French restaurateurs to throw out their service traditions for the sake of “confused” tourists.

And with all due respect to hard-pressed Irish publicans, even for locals, the opening hours on normal days can be confusing.

The point is, when we find ourselves casually dumping traditions, we should at least be clear about our reasons.

In Limerick on that Good Friday evening, the fans - with drinks in hand - who supported retention of the drink ban were not arguing on religious grounds. Rather they were expressing some ill-defined desire to hold on to a tradition they suspected might be a force for good.

It seemed like just another heart-sinking example of commerce and vested interests being allowed to drive change, with little regard for the symbolism of such decisions

Some had been disturbed by the preceding debate with its undertones of a country that seemed incapable of functioning without alcohol for a day.

More than that, it seemed like just another heart-sinking example of commerce and vested interests being allowed to drive change, with little regard for the symbolism of such decisions.

On the face of it, today’s Seanad Bill is merely about abolishing an archaic law. But it’s also about alcohol. And we have problems with alcohol that call for a sharp recognition of vested interests and some serious, grown-up debate.

1 Who are Ireland’s 17 billionaires?
2 Why has the pension age question suddenly become an election issue?
3 Man (23) doused in petrol and set on fire in Cork attack
4 Ken Early: Solskjaer’s short-term gambles proving very costly for United
5 Dr Eva’s Great Escape is everything Dermot Bannon’s recent show was not
Real news has value SUBSCRIBE