Fintan O'Toole: Review of Garda pointless until we change our idea of crime

There is prima facie evidence banks carried out a huge fraud. Where are the Garda? 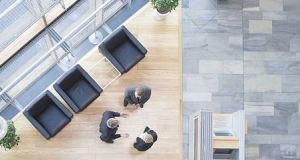 We do not need a review of the Garda Síochána. We need something much more fundamental: a review of law enforcement. The problems with the police are symptoms of problems with policing. And one of those problems is that we cannot say with any confidence that the law is enforced equally for all crimes.

Some offences are policed and some are not. For the most part the crimes that are not policed are those committed by people with money, power and respectable positions. So long as we have this blatant divide, we will never have rigorous, impartial and trustworthy policing.

Last week the governor of the Central Bank, Philip Lane, was back before the Oireachtas Committee on Finance. He spoke, among other subjects, about the massive operation by virtually the entire Irish banking system to deceive customers into giving up tracker mortgages and accepting higher interest rates.

And there was no reason to believe from anything we heard from him or his colleagues that anyone will face criminal prosecution for this enormous scam.

Let’s remind ourselves of the scale of this thing.

So far as we know about 15,000 customers were victims of the scam. To put this into perspective, recorded offences of fraud and deception generally run at about 5,000 a year. So in terms of overall crime in Ireland, this is big. It’s not a fiddle – it’s a whole orchestra.

Overall, when fines are eventually included and redress paid, we are probably looking at something like a €500 million heist.

This didn’t just happen. Lane used soft words, talking of how “lenders have failed their customers”. But that’s a bit like saying that a shoplifter failed a supermarket. Failure is passive, and there cannot have been anything passive about the systematic ripping off of hundreds of millions of euro.

Senior people in the banks had to put these schemes in place. They had to know that the changes they were urging on customers would harm those customers and benefit the banks – that, after all, was the whole point.

Those customers had to be kept in the dark otherwise why on earth would they give up a low-interest mortgage for a more expensive product?

Is there not a very strong prima facie case that very senior people in the banks deceived other people (their customers) to take an action (changing their mortgages) with the intention of making a gain for others (the bank) and a loss for those customers?

And where are the cops? From the evidence of Lane and his colleagues last week, it would seem they are nowhere much.

The Central Bank doesn’t just have the power to call in the Garda when it suspects that criminal offences have been committed – it has a statutory duty to do so.

Asked by Seán Sherlock “has the bank referred or reported to the Garda any aspect of its examination of tracker mortgages?”, Lane referred the question to Derville Rowland, the Central Bank’s head of enforcement, who said “I met the Garda to discuss trackers, and I have opened a dialogue with it. We discussed this in general terms. As our investigations proceed and progress, we will keep that under constant review, and we will make those reports where the issue arises. We have regular engagement with the Garda.”

But the bottom line? “No reports [of suspected criminality] have been made to date.”

But, equally, is there anybody who would risk as much as a fiver on a bet that the “dialogue” that has opened with the Garda on this massive scam will result in criminal prosecutions?

Given that the Central Bank has known about the existence of this systematic deception of customers since at least 2010; given that in that year it issued a letter to the banks warning “that violations would be subject to enforcement”; given that after seven years not a single report of criminality has been made by the Central Bank; and given that this whole thing is still being talked about as a “failure”; you’d be better off buying a Lotto ticket.

So, yes, of course the Garda needs radical reform. But so does our idea of crime.