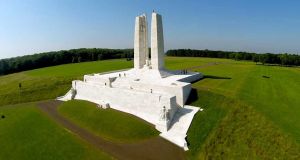 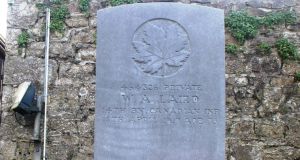 There is no more imposing monument to the horrors of the first World War than the Canadian National Vimy Memorial.

It stands at the highest point of a sharp escarpment which overlooks the Douai Plain in northwest France. From its dominating peak north of the town of Arras, one can see for miles in all directions towards the twin slag heaps that mark the battlefield around Loos and the old redbrick mining towns.

The memorial features two 30m pylons, one with the maple leaf of Canada, the other with a fleur-de-lis of France. On the walls are the names of 11,500 Canadian troops who lost their lives in the first World War and have no known grave.

In 1917 Vimy Ridge was the strongest redoubt on the whole of the German front line. The Germans had the advantages of geography and geology. They built tunnels into the chalky earth with bed compartments, ventilation, panelling on the walls and electric light. Many believed Vimy Ridge to be inviolable.

Ahead of them was a curtain of steel and shrapnel, a creeping barrage which stunned the defenders.

The Canadians took the heights of Vimy Ridge, where the memorial now stands, at the point of the bayonet. It took them three day to winkle out all the defenders with the loss of 3,598 men killed and 7,000 wounded.

Many Canadians believe Canada stopped being a British dominion and started becoming an independent nation at Vimy Ridge. The Canadian confederation was then just 50 years old. Canada barely had a standing army at the start of the war. By the end of it some 630,000 men had served out of a population of just eight million.

When the United Kingdom declared war in August 1914, Canada followed suit immediately without demure. The ties of Empire were just too strong.

That changed at Vimy Ridge. “It was Canada from the Atlantic to the Pacific on parade. I thought then . . . that in those few minutes I witnessed the birth of a nation,” Brig General AE Ross said of the Canadian victory at Vimy Ridge.

The Irish were full participants in the Canadian army. The Canadian government went out of its way to sanction Irish regiments, most famously the Irish-Canadian Rangers based in Montreal.

It began recruiting on all days, April 24th, 1916, the day the Easter Rising began. In early 1917 the regiment sailed for Ireland and received a warm reception in Dublin, Belfast, Armagh, Cork and Limerick. They were, according to the Lord Mayor of Dublin James Gallagher, the exemplar of cooperation between Catholics and Protestants in the aftermath of the Easter Rising.

The visit was a success. Large crowds turned out across Ireland. The visit generated a bestselling book. The author AM Drysdale concluded it had been a success beyond “all precedent”.

“It must be declared that even an Irish emigrant had not learned how cordial his old country could be to him on his return until he had donned the uniform which associated him in the face of the world with the cause of the Allies and the resistance of small nationalities to the oppression of Germany.”

The visit was quickly followed by ignominy. On arriving in Britain, the regiment was disbanded and the men scattered so as to reinforce Canadian divisions badly under-strength after 2½ years of fighting. All similar regiments were likewise disbanded at this stage of the war, but the nature of this decision caused the Rangers’ commanding officer to quit and return to Canada.

A total of 19,234 Irish-born men served in the Canadian Army. Others who crossed the border from the United States were listed as Americans. The Canadians did not count the dead by nationality. The Irish National War Memorial Records compiled after the war counts just 168 Irish-born men who died in Flanders while fighting with the Canadian Expeditionary Force (CEF). Yet when the In Flanders Fields museum examined the records they found among the Canadian dead, 583 men born in Ireland. As a quarter of all Canadian casualties were sustained in Flanders, it suggests more than 2,000 Irishmen died fighting for Canada in the war.

Among them was Pte William Laird (35) from Carrick-on-Shannon, Co Leitrim. He joined the 62th battalion of the Canadian Expeditionary Force (CEF) based in British Columbia in 1915.

He was seriously wounded and left to die in no man’s land in Ypres in May 1916. After a day and a night lying out in agony, he was rescued from the battlefield.

He had been shot through the groin and pelvis. His medical records show that he suffered multiple infections which, in the days before antibiotics, could not be treated. He died from his wounds in Chatham Military Hospital on April 17th, 1917.

Laird is not buried in one of the vast, perfectly manicured graveyards on the Western Front.

His family took his body home. He is buried in a solitary grave in the grounds of St George’s Church, Carrick-on-Shannon, one of 61,082 Canadian soldiers who died in the Great War.

3 How supermarkets trick us into buying unhealthy food, and what we can do about it