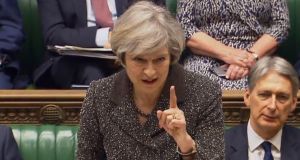 British prime minister Theresa May said a Scottish independence referendum would be ’divisive and cause huge economic uncertainty at the worst possible time’. Photograph: PA Wire

On days when you cannot see beyond the sly, shambolic cute hoorism and absence of vision in this little Republic, think of this.

Imagine the head-melting impotence of belonging to that 48 per cent of Britons who voted to remain in the EU.

Imagine having to listen to the Leavers’ latest pious cant, blaming Scotland for “divisiveness” and “uncertainty”.

On Monday, when Nicola Sturgeon triggered multiple Westminster breakdowns by calling for a second independence referendum, Theresa May responded with icy contempt.

Such a vote would be “divisive and cause huge economic uncertainty at the worst possible time . . . Politics is not a game,” she pronounced.

This of course was uttered as she was triumphantly gearing up to trigger article 50 – the mechanism by which Britain will sever itself from the EU – the consequence of an entirely unnecessary vote that has split England straight down the middle, threatens to smash the UK into fragments, and has already inflicted untold uncertainty, hurt, bitterness and bafflement on its own citizens, not to mention the three million EU pawns working in the UK.

They are currently being sold down the river called “Not showing our hand”. And to what great purpose? To settle, not the destiny of one great state or union, but a proxy war between a bunch of Tory public schoolboys, bloated with imperial nostalgia.

But Scotland billed its first referendum as a “once in a generation” event, they squeal indignantly (parroted, weirdly, by opposition leader Jeremy Corbyn).

What did they expect of a tiny state as the largest, most trusted, most legally sound single market on earth was whisked from under them? The truth is, it never occurred to them to wonder about Scotland, or Wales, or about our own island’s rather grave concerns.

“Sturgeon’s timetable would force people to vote blind on the biggest political decision a country could face. That is utterly irresponsible”, wrote the profoundly unironic Jamie Greene, a Conservative member of the Scottish Parliament.

And now Remainers must endure the spluttered protestations from the Leavers that they never made promises about staying in the single market.

Among the candidates for Outstanding Brexit Man, the winner arguably is one Daniel Hannan, a 45-year-old Conservative MEP yet lifelong campaigner for “independence”, described by an admirer as “the pamphleteer who made Brexit seem like a reasonable proposition for millions of people”.

Hannan’s recurring campaign statement reflected his modus operandi : “To repeat, absolutely nobody is talking about threatening our place in the single market.”

This is what Tory big beast Michael Heseltine has called winning “with a shamelessly false prospectus”. But heck, it was a means to an end – the duping of the citizenry.

On Monday, British Green MEP Molly Scott Cato said if the Commons did not accept the amendment for a “meaningful” parliamentary vote over the final deal, that she as an MEP, would have “more power over the Brexit process than [British] MPs”. The irony is endless.

Meanwhile, Whitehall struggles to hire trade experts and sort out turf wars as the Tory boys in charge of Brexit sound increasingly off their heads.

“We accept we aren’t staying in the single market, and we accept there’s a price to be paid for that,” secretary of state for trade Liam Fox conceded on Sunday.

In millions of miles, how far is that from their campaign promise of “a better deal that works for us all”?

Between pilgrimages to Trump’s golden throne, Nigel Farage urges his government not to pay a cent in any EU settlement.

But won’t that have implications for his own gold-plated pension? “There are going to be liabilities . . . Three or four billion pounds,” he says blithely.

Ah, but what about this famous Brexit boom of which we are told? Well, the actual Brexit is still two years away.

The boom is being driven by consumer spending, paid for out of savings and unsecured personal debt, currently sheltered by a 50 per cent interest cut and unusually low inflation.

Plus the windfall for exports is due to a dramatic devaluation of sterling caused by the referendum result.

But devaluation means inevitable steep price rises to come. Along with that, according to the Financial Times, the British government is facing rising levels of household debt, an economic downturn, that Scottish referendum, and huge pressure on public services.

Chancellor of the exchequer Philip Hammond has had to set aside £100 billion to cover the economic costs of Brexit.

The British Hospitality Association says it will need 10 years for businesses such as sandwich chain Pret a Manger to replace EU staff after Brexit.

And two of Britain’s leading think tanks forecast that by 2022, real average earnings will be no higher than they were in 2007.

Yet the Leavers and their social media goons, blinded by hubris and hatred, keep missing the target.

As May and co drive on, they gloat: “Happiness is p***ing off a liberal.” And misery is cutting off your nose to spite your face.

Watch for the imminent explanation, once familiar in post-communist countries, the one that goes: “The ideas were good, it was the people who failed.”