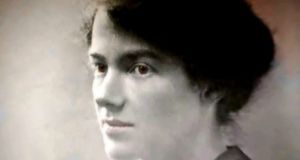 Louise Gavan Duffy, who died 50 years ago on October 12th, may not be as well known as her father Charles, Young Irelander, founder of the Tenant Right League and premier of Victoria in Australia, or her brother George, signatory of the Anglo-Irish Treaty and later president of the High Court, but her contribution to Irish life as a nationalist, suffragist and, above all, educator, was not insignificant.

She was born in July 1884, near Nice in France, the only daughter of her father’s third wife, Louise Hall of Cheshire.

She was only five when her mother died, and her Australian half-sisters from her father’s second marriage raised her in Nice, where she was privately educated at home. Seeing a reference to an Irish grammar in a book catalogue, she asked her father about it. He told her that his own mother was fluent in Irish but didn’t speak it to him. This determined her to learn Irish but her first time to come to Ireland was in 1903 to attend her father’s funeral.

She wanted to stay here but wasn’t in a position to do so until a legacy from her maternal grandmother made it possible in 1907, whereupon she joined the Gaelic League, went to the Mayo Gaeltacht and became fluent in Irish. She matriculated and while residing at the Dominican Women’s College, Eccles Street, she studied at UCD and graduated in 1911.

When Patrick Pearse set up the short-lived Scoil Íde as a girls’ companion school to Scoil Éanna, she taught there and acted as manager, going on to do the Cambridge teacher’s diploma in 1913 and the MA from UCD in 1916. At the same time she was an assistant in education in Dominican Training College, Eccles Street.

As well as supporting the movement to secure the vote for women, she joined Cumann na mBan (the women’s auxiliary to the Irish Volunteers) on its foundation in April 1914. Although unaware of the plans for a rising and indeed opposed to it when it happened, she nevertheless made her way to the GPO on Easter Monday, where she made Pearse aware that she thought his and his comrades’ action irresponsible because it had no hope of success and would lead to loss of life. She helped in the kitchen on the top floor of the GPO and was among the last to be evacuated on the Friday evening, managing with others to bring some wounded men to Jervis Street Hospital.

Re-elected to Cumann na mBan’s executive in 1917, she became active in the National Aid Association and Volunteers’ Dependants’ Fund, set up to help families of men who had lost their lives or were in prison.

In September 1917, she and Annie McHugh (who afterwards married Ernest Blythe) set up Scoil Bhríde, an Irish-language school for girls, at 70 St Stephen’s Green.

They began with 12 pupils and had 100 within a year. The school was run on the educational principles that had inspired Pearse’s original schools.

During the War of Independence, some sessions of the first Dáil were held there and documents and other materials concealed there, which led to a number of military raids on the building.

Louise Gavan Duffy supported the Treaty but after the Civil War was no longer politically active, devoting all her time to education. Keeping the school going was financially difficult but its incorporation into the national-school system from 1926 eased the situation.

She continued to teach in Scoil Bhríde until 1947. From 1926, she lectured in UCD’s Department of Education and also worked as a government supervisor.

In addition, she provided money to Terence MacSwiney’s sisters to set up an Irish-language school in Cork.

The National University of Ireland awarded her an honorary doctorate in 1948.

After retiring, she did a lot of work with the Legion of Mary, and with a group that assisted French au pairs who worked in Dublin, where her fluent French would have been of great benefit. Her witness statement to the Bureau of Military history is an important source for information on Cumann na mBan.

In 1962, she made a television programme in the Self-Portrait series, where she looked back at her active life, and on the 50th anniversary of the Rising, she gave a detailed lecture in UCD on Cumann na mBan and the events of Easter Week.

She died, unmarried, at her home, 7 Kennilworth Square, Dublin, and was buried in the family plot in Glasnevin Cemetery. In April 1984, Scoil Bhríde, now on Oakley Road, Ranelagh, held a week of events to honour her memory.

1 Late Late Toy Show: Music, tears, Tubridy’s F-bomb and €5m for charity. What a night!
2 'It just doesn’t feel safe': The restaurants that will not reopen in 2020
3 Ireland in precarious position as third Covid-19 wave could be more deadly, Nphet warns
4 Basic income for all: Has the Covid crisis given us a new economic model?
5 Viggo Mortensen: It ‘felt awkward’ replacing Stuart Townsend in Lord of the Rings
Real news has value SUBSCRIBE