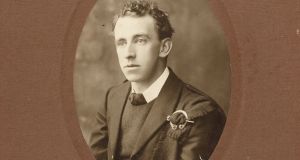 Thomas MacDonagh: fell foul of local politics in Kilkenny and was accused by the local newspaper of being a propagator of “West British games” and a “minor poet”. Photograph: National Library of Ireland

As an ardent cricketer, and a Tipperary man, Thomas MacDonagh might have sensed he was entering a sticky wicket when in 1902 he took up a teaching job in neighbouring Kilkenny, his county’s bitter rivals in a different sport involving stick and ball.

But MacDonagh’s early departure from St Kieran’s College, and Kilkenny in general, has usually been attributed to a disagreement over another of his loves, the Irish language. The fee-paying St Kieran’s was an Irish-free zone then, mirroring such elite colleges as Clongowes (where as one former pupil put it, Irish was disdained as “the language of the kitchen”), which in turn followed the curriculum, educational and sporting, of the English public schools.

Hence, MacDonagh’s biographers have agreed, his decision to leave Kilkenny in 1903. But an essay in the latest Tipperary Historical Journal argues that it was a rather grubbier sequence of events, more to do with local politics and vested interests, that drove MacDonagh out of the city.

And that in the dirty fight he found himself in, his fondness for cricket, rugby, and, above all, poetry, were all used against him. The essay, by Proinsias Ó Drisceoil, suggests MacDonagh’s days in Kilkenny were numbered after a meeting of the local Gaelic League on June 1st, 1903. In his role as joint-secretary, the Tipperary man raised a violation by two named branch members of the rule that, where possible, Gaelic Leaguers should support each other for election to public positions.

MacDonagh referred to a recent meeting of Kilkenny Corporation, where the position of borough treasurer was at stake, with a Gaelic League candidate named Patrick Kennedy.

Alas, two league members had voted against Kennedy, securing the job for one PJ O’Keeffe. MacDonagh said it was “painful” to have to raise the matter, “but I would not be doing my duty in remaining silent”.

His contribution earned applause. But he was joined in not remaining silent by one of the members he had named, Alderman James Nowlan, who objected that he should have been given notice. Nowlan then defended his vote for O’Keeffe, calling him “a thorough Irishman”. Having made O’Keeffe a promise, he “would break it for no man, Gaelic Leaguer, or anyone else”.

The Corporation aside, Nowlan was also – secretly – a member of the Irish Republican Brotherhood. So, it seems, was O’Keeffe – as Ó Drisceoil notes, that’s what the coded term “a thorough Irishman” meant. But Nowlan was national president of the GAA too (the IRB and GAA were intimately connected), and generally a powerful figure in Kilkenny. The election of borough treasurer had involved intense canvassing: one Corporation member complained he had been “dragged out [...] of my bed” to vote. And before getting his man in, Nowlan had also lobbied for the job to be well paid – £3 a week, rising to £4 – “against strenuous opposition for a lower rate”.

Unfortunately for MacDonagh, Nowlan’s local allies included the Kerry-born editor of the Kilkenny People, Edward Keane. And a few days after the Gaelic League meeting, that newspaper’s editorial columns opened fire on the Tipperary upstart. The headline borrowed its title from a famous Walter Scott poem, The Lay of the Last Minstrel, amending the “Last” to “Lost”, a sarcastic reference to MacDonagh’s poetry. Under that, the article called him “a young man with a swelled head”, “a minor poet with his head in the clouds”, a “Hot Gospeller for the Gaelic League”, and a propagator of “West British games”, who had “forsook the attractions of Rugby Football for the more exhilarating pastime of ‘baiting’ the President of the Gaelic Association”.

The phrase “minor poet” was used twice in the diatribe.

MacDonagh was accused of being more interested in “climbing the slopes of Mount Parnassus” than “ordinary, mundane” matters. And in summary, his public “attack” on Nowlan was said to be “about as cool a piece of impertinence as Kilkenny has heard for a long time”.

It should be noted, as Ó Drisceoil does note, that MacDonagh’s support for Kennedy was not necessarily disinterested. They were from the same town, Cloughjordan.

And there may have been other reasons for MacDonagh’s departure from Kilkenny than powerful enemies. But the timing suggests otherwise.

In any case, he left soon afterwards for a job in Fermoy.

Thereafter his path to martyrdom was via the same IRB, which he joined only in 1915. A year later, he would die “like a prince”, according to his jailers.

And among his last acts as a free man, in Jacob’s factory, was to ask a captive British soldier to teach him a then new cricket bowling technique, the oddly-spinning “googly”.