New appointments commission may be hijacked by groups with specific agendas 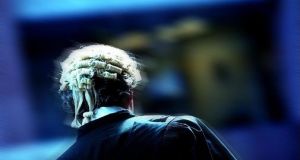 Matters perceived as affecting the independence of the judiciary tend to provoke a strong reaction on the bench, and that is certainly the case in relation to the planned new regime. File photograph: Getty Images

There is no doubting the concern at the highest levels in the judiciary about the Government’s plan for changing the way in which judges are appointed and promoted.

Matters perceived as affecting the independence of the judiciary tend to provoke a strong reaction on the bench, and that is certainly the case in relation to the planned new regime.

The name of the Minister for Transport, Tourism and Sport Shane Ross, who insisted on the measure as part of the programme for government, is more spat than uttered in some quarters these days.

Although the Judicial Appointments Commission Bill has quite a number of objectives and elements to it, including the creation of a €500,000-a-year body that will support the new selection procedure, the issue creating the most heat is the fact that the commission will have a “lay” majority.

The fear, at a very high level of the judiciary, is that these lay members – they will outnumber judges and lawyers – will operate as a type of Trojan horse for the introduction of people seeking to pursue specific political agendas into the judicial selection process.

There is also strong concern about the proposal that the candidates for the lay positions, who will have been approved by the Public Appointments Service, must have their appointment confirmed by the Dáil and Seanad.

At a meeting of the Oireachtas Committee on Justice and Equality on Wednesday, barrister and Fianna Fáil TD Jim O’Callaghan suggested that people with strong pro-choice or pro-life views might seek to get on to the commission.

Addressing the same committee meeting, the Tánaiste and Minister for Justice and Equality, Frances Fitzgerald, said “consumers” of the court process should be reflected in the new commission. “I have in mind interest groups involved in law matters, penal matters, victim concerns and community law interests acting in a representative capacity locally and otherwise.”

This is the sort of talk that makes senior members of the judiciary lose sleep. They fear for the independence of the Irish bench. There was for a long time a strong party political aspect to how judges were appointed, but nevertheless it is widely acknowledged that the Irish judiciary is one of the most independent, and respected, in the world. This is because, irrespective of how they were appointed, once appointed the tradition was, and is, that party considerations are left behind.

The judges now fear that people seeking to pursue particular political agendas will get their hands on the levers of judicial appointment.

The Tánaiste, in her response to comments made at the committee by O’Callaghan, said the public appointments service, which will select the lay candidates for the Judicial Appointments Commission, should be trusted.

She mentioned the possibility of senior Civil Service and public service managers, human resources and recruitment specialists, education and training experts, and equality and diversity experts, being brought to the table.

The overall objective, which everyone shares, is that merit is the lead criteria for the appointment of judges. But, as Fitzgerald said, “merit is often in the eyes of the beholder”, noting that there was a time when the process all but excluded women. In the UK, merit once meant “coming from the same party as the lord chancellor”.

Broadening the range of views involved in selecting judges could well improve the judiciary in ways that, left to its own devices, it might shy away from. The proposed shift in the appointment system reflects changes in neighbouring jurisdictions, driven by the view that it is problematic in a democracy to have one branch of government having too great a role in choosing its colleagues. Just like here, the shift elsewhere has created unease in the judiciary.

At the committee hearing O’Callaghan said it was insulting for the Government to suggest that the heads of the Supreme Court, Court of Appeal, High Court, Circuit Court and District Court, were they all to be on the appointments commission, would “seek to appoint their mates”.

Judges are obviously not the only ones who can get touchy about their turf being invaded.

All the pointers are now that the Government’s scheme will be established. Sinn Féin’s Jonathan O’Brien and Independent deputy Clare Daly have voiced support for a lay majority.

With the new Government Bill unlikely to be published before the end of next month, it seems highly unlikely that a new regime will be in place in time to select who will replace the Chief Justice, Susan Denham, who is due to retire on August 22nd.

The longest-serving member of the Supreme Court, she was the first women to be appointed to it (in 1992), and the first woman chief justice. She has long been deeply involved in pressing for judicial reform. She met the Taoiseach, Enda Kenny, last month to express her concerns about the lay majority issue.

One of those mentioned as a possible new chief justice is Mr Justice Donal O’Donnell, a highly regarded member of the Supreme Court.

Interestingly, he headed the Judicial Appointments Review Committee that dealt with the Tánaiste in relation to the proposed new appointments regime.

He was reportedly not happy at all when he turned up to meet her in the Department of Justice late last year, only to find the Minister for Sport also in attendance.