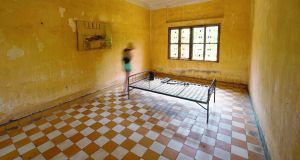 The Convention against Torture and Other Cruel, Inhuman or Degrading Treatment or Punishment defines torture as “any act by which severe pain or suffering, whether physical or mental, is intentionally inflicted on a person for such purposes as obtaining from him or a third person information or a confession, punishing him for an act he or a third person has committed or is suspected of having committed, or intimidating or coercing him or a third person, or for any reason based on discrimination of any kind, when such pain or suffering is inflicted by or at the instigation of or with the consent or acquiescence of a public official or other person acting in an official capacity. It does not include pain or suffering arising only from, inherent in or incidental to lawful sanctions. “

It was adopted by the General Assembly of the United Nations in 1984. It consists of 33 articles and entered into force in 1992. More than 160 states, including Ireland, have signed up to it.

Its high purpose, dating back to the foundation of the United Nations in the aftermath of the second World War is “to ensure adequate protection for all persons against torture and other cruel, inhuman or degrading treatment or punishment”.

In 1988, the Committee against Torture was established pursuant to article 17 of the convention. It consists of 10 experts of “high moral standing and recognised competence in the field of human rights”. Every four years or so, it examines the progress made by countries that signed the convention towards achieving its goals.

You would have to wonder what these 10 experts made of the Irish when they turned up for their four-yearly review last week. According to the documentation on the Office of the High Commissioner for Human Rights website, the issues Ireland was to be quizzed on ranged from gender-based domestic violence to abortion, the use of Irish airports for rendition and the state of the prisons. They were also asked about the implementation of the Commission to Inquire into Child Abuse (the Ryan Report Implementation Plan), the Magdalen laundries and whether we still smack our children.

As well as the State’s response to these issues, the experts also heard from various Irish civil society organisations, several of which, including the Irish Human Rights and Equality Commission and the advocacy group Sage, garnered headlines for themselves by claiming that people are being detained in old age people’s homes and subjected to cruel, inhuman and degrading treatment.

Whilst these are all real problems and worthwhile issues, they seem a million miles away from the work of the Committee against Torture. They are in a very different category to the problems experienced by the victims of regimes that routinely use torture as a political tool.

A growing number of Irish civil society organisations are using platforms such as the Committee against Torture to raise domestic issues. In doing so, they leave themselves open to accusations of perverting the mission of these organisations to further their own ambitions and agendas.

And while there may be a grain of truth or two in this allegation, the issue is of course more complex. It is unlikely that these organisations would trek out to Geneva and twist their issues around the mandate of the Committee against Torture if they were getting any traction on them back in Dublin. But the fact is that they are not making progress on them at home.

If you ask these organisations why they engage in the semantic gymnastics needed to turn their concerns into something that contravenes a convention aimed at combating one of the the deepest forms of human depravity, they will tell you it is frustration. They will argue that the only way they can get the Government to face up to its obligations and commitments across a whole range of issues is to embarrass it in an international forum. Preferably one whose rulings have a some sort of weight.

It paints a not very flattering – but familiar – picture of Ireland as some sort of deeply dysfunctional family that goes to great lengths to keep up appearances for the neighbours. We are terrified that other countries will realise that our abortion legislation is inhuman, that we don’t look after old people or children terribly well and that the way we treat prisoners leaves much to be desired.

It is legitimate to ask what on earth organisations like Sage are doing taking up the time of a body that is supposed to be making sure that failed states don’t waterboard political prisoners with complaints about the quality of care provided in a retirement homes .

But the fundamental question we should ask is this: what is it about the way we go about the business of government in Ireland that makes it expedient, effective and arguably necessary for them to do so?

1 Restarting Ireland: When and how will we ‘get back to normal’?
2 What is Houseparty, the app everyone’s talking about – and not in a good way?
3 Tuberculosis vaccine ‘potential game-changer’ in Covid-19 fight
4 Belfast phone mast hit by arson after claims over 5G link to coronavirus
5 Mary Lou McDonald: This crisis shows that Sinn Féin was right
Real news has value SUBSCRIBE