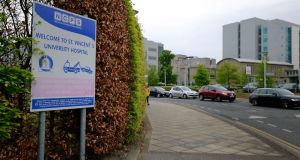 The dignified retreat by the Sisters of Charity from the quagmire that is St Vincent’s Hospital clarifies things somewhat. It confirms what was obvious from the outset, which is that the row about the location of the new National Maternity Hospital on the St Vincent’s campus was never about the nuns and their Catholic ethos.

It was all about who would own four hospitals in south Dublin – St Vincent’s University, St Michael’s Hospital, St Vincent’s Private and the as yet unbuilt National Maternity Hospital – and for what purpose.

As things stand it now looks as though all four – which will amount to a very significant part of the health infrastructure in south Dublin – are going to be in the hands of a body that at best is only indirectly accountable to the Health Service Executive, the agency responsible for running the national health service.

That is not an inherently bad thing but it should be remembered that St Vincent’s is an organisation that has a long history of thinking it knows best when it comes to spending taxpayers’ money.

It has had several run-ins with the HSE. The most recent being last August when it emerged that three senior managers at St Vincent’s University Hospital were paid “once-off compensation” after salary top-up payments were terminated at the request of the HSE. St Vincent’s maintained the payments where made by the private part of the group

The HSE stopped the policy of salary tops-ups in 2014 after public controversy over payments to senior executives, governance arrangements and consultant contracts. The HSE provides more than €200 million in annual funding to the public hospitals in the group.

The HSE has also raised concerns about the financial arrangements between St Vincent’s University and St Michael’s Hospital, which are publicly funded, and St Vincent’s Private Hospital. In particular it is concerned that a charge was created on St Michael’s in Dún Laoghaire by St Vincent’s Healthcare Group in favour of Bank of Ireland. The concern was that a publicly-funded hospital was potentially being mortgaged to fund a private hospital.

St Vincent’s Private Hospital’s chief executive refused to provide the consultants with the original documents in relation to the St Michael’s charge, saying they contained commercially sensitive information. The HSE also had concerns about the the public and private caseload mix of consultants in the St Vincent’s Healthcare Group.

St Vincent’s encapsulates one of the main – if not the main – structural problems within the Irish health service: the interweaving of the private and public hospital systems and all the perverse incentives its creates. At its very simplest private hospitals cannot prosper unless the public hospital system fails. Organisations such as St Vincent’s and individuals such as consultants with a foot in both camps have a vested interest in maintaining this status quo – if not to exacerbate it.

It is no accident that disentangling this dysfunctional system is one of the headline items in the report published on Monday by the Oireachtas Committee on the Future of Healthcare.

The idea that the HSE should now sit back and allow three public hospitals to be ring-fenced with a private hospital in some opaque new entity that has a track record of giving it the two fingers seems at best a little short-sighted. At its worst it is simply negligent. Based on its experience to date the HSE will have only limited oversight of the internal workings of the group. It will be very difficult to form a view as to whether public money is subsidising a private hospital which can pay its employees – some of whom may also work in public hospitals – whatever it likes. Its ability to do anything about it will be equally circumscribed.

There is further cause for concern in the body language coming from the board of St Vincent’s which is very well populated with Irish business grandees. They seem to have succumbed to the old trope that a dose of private-sector rigor can sort out the problems of the public sector. It is never that simple and they only have to look at the shambles that is the Trump administration with its cabinet composed of US billionaires to see that.

The departure of the Sisters of Charity has created the opportunity for the State to take control of the public hospitals in the group. They also have the right to do so. It should not be forgotten the hospitals were built with public money and gifted to the Sisters of Charity, not an opaque organisation controlled by business people and consultants with a deep enthusiasm for private medicine

They State should take the opportunity or risk creating a monster.