Time, gentlemen – An Irishman’s Diary on Dublin pubs of yesteryear 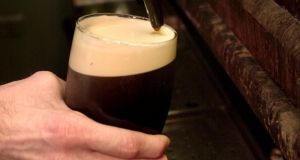 “Leo had strict rules. Infringement meant banishment. A list of the barred would have stretched to the far reaches of S t Stephen’s Green.” Photograph: Dara MacDonaill

As James Joyce recounted in Ulysses, Leopold Bloom on his wanderings through Dublin entered Davy Byrnes on Duke street to partake of a Gorgonzola cheese sandwich and a glass of burgundy. A “moral pub” was how Joyce described it.

Sixty years or so after Bloom’s meanderings I entered a number of pubs on my wanderings around Dublin which would have qualified for Joyce’s sobriquet. Unlike Davy Byrnes which is thriving and on the market for sale, they have either disappeared or changed dramatically.

There was the Pearl Bar, a few paces from the old premises of The Irish Times on Westmoreland Street where I laboured for a number of years. Gus Weldon, the proprietor, was a man of gentle nature and respectability. He would not serve a woman unless she was accompanied by a man. If she had the audacity to order a pint of beer she would be presented with a half-pint; Mr Weldon considered it uncouth for a woman to be seen drinking from a pint glass. He did not like bad language to be used and if vulgarities escaped in the heat of journalistic argument he would intervene with a whispered but highly audible admonition, “Gentlemen, please”.

North of the Liffey directly opposite the Gate Theatre there was Groome’s Hotel, probably the most elite after-hours (ie illegal) establishment in the city. It was owned by Joe Groome, a founding member of Fianna Fáil, but it was presided over by his genial wife, Patti. It was a legendary Fianna Fáil late-night drinking den but it was frequented by politicians of all hues, lawyers, journalists, actors and other ne’er-do-wells. There could be seen the young turks of Fianna Fáil in their sharply cut mohair suits led by Charles Haughey, Donagh O’Malley and Brian Lenihan. No drunkenness or loud behaviour was tolerated and discretion was the ticket of admission.

I once took an earnest young recruit to The Irish Times there, after hours of course, and after a few pints elsewhere. Before drink could be ordered from Patti he spotted a well-known district justice quietly sipping his whiskey in a corner. Up he strode. “You’ll be sitting on the bench tomorrow,” he roared, “sending people down for drinking and driving. You’re nothing but a disgrace.” We were barred.

But by far and away the temple of morality and respectability was O’Neill’s on the corner of Merrion Street and Merrion Row, now trading under different ownership. It was sternly ruled by the proprietor, Leo. He was a thin, gaunt, pale-faced man, dressed in white shirt with winged collar and black apron. Brendan Behan (barred, of course) occasionally stuck his head round the door and bellowed; “Leo, how much would you charge to haunt a house? ”

Leo had strict rules. No women, no swearing, no loud arguments. Infringement meant banishment. A list of the barred would have stretched to the far reaches of St Stephen’s Green. Along with Behan there were Patrick Kavanagh, Myles na gCopaleen and Anthony Cronin. It was frequented largely by civil servants from the government offices round about.

Occasionally a musician would wander in for rest and relaxation from O’Donoghue’s singing pub across the road.

One evening I was having a drink there with my colleague from The Irish Times, the late Donal Foley. We were joined by Luke Kelly of the Dubliners. Now Luke, at times, could be a bit tiresome, particularly when he became enthused about his favourite topic, socialism. He was lecturing us at length about the Soviet Union.

To break the tedium I muttered to Donal “Ask him about Lithuania” (where some of the natives had recently expressed disquiet about the glories of Moscow rule). Donal posed the question. “F... you and Lithuania”, roared Luke, and threw the contents of his pint at us.

He immediately joined the list of those barred for life.