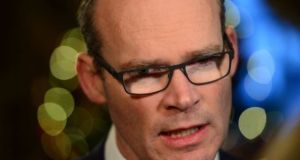 Despite support for the Bill, Minister for Foreign Affairs Simon Coveney continues to oppose it. Photograph: Dara Mac Dónaill/ The Irish Times

On July 12th, the Irish flag flew outside the City Hall in Ramallah, Palestine. This was done as a gesture of gratitude for the vote by the Seanad on the previous day to support Senator Frances Black’s Occupied Territories Bill. This Bill returns to the Seanad this week on November 28th for a further critical vote. If enacted, it will prohibit the sale in Ireland of goods and services originating in settlements which Israel has built – and for 40 years consistently expanded – on Palestinian land, in flagrant violation of international law.

Despite support for the Bill from all of the major political parties except Fine Gael and a broad range of Independents, not to mention popular support for the Bill, Minister for Foreign Affairs Simon Coveney continues to oppose it. He does so primarily on the basis of its alleged incompatibility with EU law. This view, he says, is supported by an opinion of the Attorney General although that opinion has not been made public. While Coveney’s interest in the Palestinian situation cannot be doubted, his argument simply does not hold water.

Prior to the Bill being voted on in July, three lawyers had expressed their view that stopping trade with Israeli settlements does not breach EU law – Michael Lynn, a prominent Irish Senior Counsel; Prof James Crawford, a judge of the International Court of Justice; and Senator Michael McDowell, a former attorney general.

In the Dáil in October, Fianna Fáil’s foreign affairs spokesperson, Niall Collins, drew the Tánaiste’s attention to these opinions. The Tánaiste simply dismissed them by stating that “one can find a lawyer somewhere who will give an alternative view”. He also referred to an official position of the European Commission that the Bill is contrary to EU law although it is not clear that such a position exists.

Since then, a further legal opinion has been produced on the Occupied Territories Bill specifically. It is authored by Takis Tridimas, professor of EU law at King’s College London and a barrister with an extensive record of practice before the European courts. Tridimas’s academic work has been cited on several occasions by the Irish courts, including in a decision handed down by Supreme Court judge Mr Justice Peter Charleton in July of this year. His opinion that the Bill is compatible with EU law is unequivocal.

It is revealing to contrast the approach being taken by the Government to this Bill with the approach taken to banning goods from Apartheid South Africa in the 1980s. In his autobiography, the former Labour Party minister Ruairí Quinn recalls how, following the renowned strike by the Dunnes Stores workers over their refusal to handle such goods, the government sought to ban their importation. The original advice of the then attorney general, Peter Sutherland, was that such a ban would be contrary to the law of what was then the European Economic Community.

Undeterred by that advice, the former minister identified a basis under international law for prohibiting trade in goods produced with forced prison labour, which white South African farmers were employing at the time. By then a new attorney general, John Rogers, had been appointed and his advice was again sought. In the words of the former minister, the advice was “very much a case of the legal bottle being half full rather than half empty.” And with that the historic ban was adopted.

The legal bottle, when it comes to the Occupied Territories Bill, is more than half full. The excessively conservative position being taken by the Government on EU law in relation to the Bill is not sustainable in the face of the chorus of eminent legal opinion contradicting its position. It also stands in stark contrast to its approach to EU law in relation to its refusal to collect €14 billion in tax from Apple – a case in which the European Commission has actually adopted an official legal position contradicting that of the Government.

Senator Black and her supporters simply seek to ensure that goods produced in circumstances which amount to a war crime under international law do not end up on the shelves of Irish supermarkets. Fine Gael must now join all other Irish political parties and ensure that Ireland once again takes a stand in opposition to a major international injustice – this one being the 51-year-old occupation of Palestine.