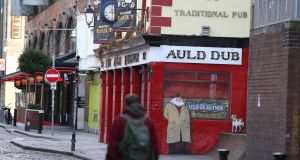 Maybe Level 5 really is our one last best shot. But are we willing to accept it without question – without a lot of questions? Photograph: Stephen Collins

This will be the longest, coldest, bleakest winter anyone can remember, and it’s only getting started. Politicians are making cloying promises about “saving Christmas”, as though they’ve forgotten which movie we’re in.

That’s the one with Dudley Moore playing an elf, Taoiseach. We’re in the one with Matt Damon, who obligingly returned to Dalkey last week for the premiere of Lockdown 2.

If planning for the most sedate, most socially distant festive season in history in nine weeks’ time isn’t reckless, it’s at least hopelessly naive. Cast your mind back to the first wave. Cases did not peak until the third week in April, one month into full lockdown. By June 8th, 88 days after schools were shut, the daily rate was consistently below 50.

How did our systems become so overwhelmed last weekend that sick people were left to do their own contact tracing?

Chief medical officer Dr Tony Holohan predicts this lockdown will get us to between 50 and 100 cases a day by December 25th. But what if we’re nowhere near the peak yet? Chances are the virus will still be raging at what used to be called Christmas.

We know the numbers need to come down. Most people accept herd immunity is not a strategy. What we don’t know is whether our sudden swerve into the most severe lockdown in Europe is based on science or blind panic and bunker thinking.

No real context has been offered beyond the gloomy nightly recitation of the caseload data, delivered as though it is the rosary and we’re sorrowful worshippers. “It’s our one last best shot,” Tánaiste Leo Varadkar said this week. But what then?

In March, the goal was clear: we were buying time. Many of us willingly ceded our freedoms on the unspoken understanding that the Government would do its part and use the time to increase capacity in testing, tracing and in hospitals and protect the economy.

Some of this was achieved – more ICU beds, more testing, more contact tracing; financial measures to protect people from the worst economic impacts. But it can’t have been enough, because here we are again. Maybe Level 5 really is our one last best shot. But are we willing to accept it without question – without a lot of questions?

For a start, has the Government actually done its part? How did our systems become so overwhelmed last weekend that sick people were left to do their own contact tracing?

Nursing homes were abandoned without PPE last time round. They were our Lombardy. We said never again.

So why, this week, was the manager of the Nightingale home in Ahascragh left to make a sobbing appeal to the Health Service Executive on Liveline for help? The HSE said it had not abandoned the home; but if so, why were one nurse and one care worker left to care for sick patients alone for a 13-hour shift?

Debate, questioning, robust argument and total transparency are essential to a free and functioning society

There are other questions we should be asking. Why wasn’t Level 3 given a chance to work, when the most recent letter from the National Public Health Emergency Team (Nphet) suggests the infection rate in Dublin has actually slowed to an R of 1.0, the threshold below which the number of cases starts to shrink? Why couldn’t the fines that are suddenly so central to the strategy have been deployed at an earlier stage?

Where are the experts in mental health and behavioural science who should be involved in the decision making? Where are the women? Good decisions are never made in a room which excludes 50 per cent of the people who will be impacted. Even the smartest, most progressive men see the world through a man’s eyes.

If you want to include the female gaze, you need a woman in the room. (If you want to know whether it makes a difference, neither the guidelines nor two Government press offices could tell me whether the informal, unregulated childcare arrangements many families rely on can continue for non-essential workers.)

On a note that may or may not be related, why are the GAA senior inter-county championships allowed to go ahead, despite significant clusters all over the country caused by recklessly unforgivable celebrations?

Holohan believes it is “important to try to preserve some of that kind of activity to give us all something to look forward to”. Since when is the chief medical officer the arbiter of what lifts the nation?

Why are the things that lift some non-GAA fans’ hearts less worthy – strolling through a quiet gallery; watching a play performed in a socially distanced venue; walking on a beach that’s more than 5km from home; playing golf?

Where does that entirely arbitrary 5km come from? The letter from Nphet emphasises the “potential impact of the stay-at-home measure . . . curtailing non-essential travel to within 5km of home”. It doesn’t say what this potential is, or why travelling 7km or 10km is so risky, especially when all of the data suggests home is where the virus is. Why aren’t we testing people who are flying into the country? Why aren’t we having a proper debate on maintaining virus control across the Border?

And then there’s the question not even Holohan can answer. How many more times are we going to have to do this?

A dangerous view has crept in that questioning Nphet advice is callous or fearmongering or heretical. But these are the biggest decisions this country will ever make. They can’t be made in a bunker by an unrepresentative and exhausted group.

This week, in the Bundestag, Germany’s second-highest figure questioned whether emergency legislation from March, with its “extremely intensive and far-reaching limits on fundamental rights”, was justifiable in the long term. Extensions of the regulations should only be agreed if they had a clear time limit, Wolfgang Schauble said.

This week, the Government scheduled a debate of a cursory 45 minutes on the extension of the emergency powers, and only extended it after objections from the Opposition and the Irish Council of Civil Liberties.

Debate, questioning, robust argument and total transparency are essential to a free and functioning society. Remember when we had one of those?