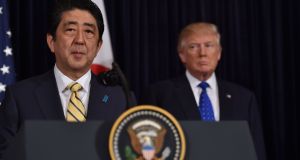 This weekend, Mr Trump hosted Japan’s Prime Minister Shinzo Abe at his Mar-A-Lago club on Palm Beach. Mr Trump’s club doubled the $100,000 nomination fee for what is known as the “winter White House” shortly after he was inaugurated.

Whoever said the personal is political did not have Donald Trump in mind. In the last week alone, the US president berated a chain store for dropping his daughter’s branded product line; the White House counsellor, Kellyanne Conway, then urged television viewers to go out and buy Ivanka Trump’s products. Meanwhile the first lady, Melania Trump, is suing a newspaper on the grounds its defamation ruined a “once in lifetime” chance for her to make money. No US president in history has triggered anything close to this many conflicts of interest - and this is just his family. Trump Inc is turning into America’s newest fourth estate.

Mr Trump’s ability to benefit personally from office is immense. Every time he tweets against a company, its stock briefly nosedives. A minute’s notice would enable a savvy operator to monetise the damage by shorting the stock. Federal enforcement of insider trading laws is handled by the Securities and Exchange Commission, whose head Mr Trump hopes will be Wall Street lawyer Jay Clayton. On a strict reading, Mr Trump is already in breach of the US constitution’s emoluments clause, which bans officer-holders from accepting gifts from foreign governments. Every time an embassy rents the Trump International Hotel’s ballroom the money will end up in the president’s pocket. Conflicts are assessed by the General Services Administration whose head Mr Trump will appoint.

Yet the US courts are unlikely to go near anti-Trump lawsuits. A plaintiff must show they have suffered damage. It is hard to see how anyone could prove they were personally harmed by the Trump Hotel’s high occupancy rates, or his booming golf courses. Many of Mr Trump’s potential conflicts are hidden as he has refused to release his tax returns, which means he could pocket any such benefits with impunity. Short of Mr Trump taking a direct foreign bribe, do not expect the judiciary to act as a check on him. Expect even less of Congress. Mr Trump’s Republican colleagues would be the last people to embark on fishing expeditions into his business interests, still less to impeach him. The field is wide open. Those hoping he will be brought down by the system are guilty of wishful thinking.

But the damage to American democracy - and its global standing - is incalculable. Those wanting to influence America’s 45th president know that the best route is via his family - particularly Ivanka Trump and Jared Kushner. China has already invested diplomatic capital wooing the first daughter and her husband, who is seen as the president’s most trusted adviser. Ivanka’s attendance at the Chinese embassy’s Chinese new year celebrations may have played a role in Mr Trump’s endorsement of Beijing’s “One China” policy a few days later.

The fact that she sat in on her father’s first meeting with Shinzo Abe, Japan’s prime minister, also spoke volumes. Ms Trump’s company is planning to launch a Japanese accessory line in a joint venture with a Japanese state-owned bank. Though Ms Trump has given up control of her company, she has not divested her stake. She is only following her father’s example. The president has retained ownership of the Trump Organization but handed over its running to his two sons, Eric and Don junior. It is the opposite of a blind trust.

Plenty of US presidents entertain foreign leaders at their retreats - George Bush senior hosted at Kennebunkport in Maine and Bush junior at his Texan ranch in Crawford. But these were private homes. This weekend, Mr Trump hosted Mr Abe at his Mar-A-Lago club on Palm Beach. Mr Trump’s club doubled the $100,000 nomination fee for what is known as the “winter White House” shortly after he was inaugurated. Likewise, Washington’s increasingly pricey Trump International Hotel is turning into the White House’s informal guest house. Everyone knows Mr Trump rewards people who treat him well. Shortly after Mr Trump was elected, Trump Hotels announced plans to quintuple its outlets in America.

But what price will America pay? Even without overt lawbreaking, the reputational damage is bad enough. Mr Trump’s insistence that conflict of interest laws do not apply to him robs America of standing to accuse other countries of bending the rule of law. Even where Mr Trump has the highest motives, he will fail the Caesar’s wife test. Critics of Mr Trump’s “Muslim ban” point out that it omits countries such as Saudi Arabia, in which Trump Inc. has business interests. How much will Trump Inc. benefit from the White House’s big infrastructure plan? What boost will Manhattan property magnates receive from Mr Trump’s tax cuts? How many product lines will Ivanka Trump’s business roll out in China? It will be impossible to quell suspicions of self-dealing.

The corrosion of faith in US institutions was already deep. Last month, the Economist Intelligence Unit downgraded American democracy to “flawed” from “full”, putting it in the same category as Italy and India. Its chief reason was falling public trust in government. Its decision was based on what happened before Mr Trump was elected. The problem is now many times greater. Mr Trump’s terms of contract are entirely one-sided. The Trumps can only gain. America will pick up the tab.

1 Pubs in Ireland may need to reopen county-by-county, says WHO’s Mike Ryan
2 When Covid subsided, Israel reopened its schools. It didn’t go well
3 How safe is it to go back to the office?
4 ‘I’ve had my butt kicked for the past three years’: Jamie Oliver on fame and failure
5 Q&A: Pubs, travel and weddings, the decisions Cabinet will make today
Real news has value SUBSCRIBE