Its history is one of turf wars, appeasing vested interests and scaremongering 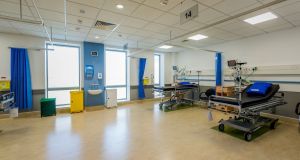 ’What was created was a health system that became extraordinarily uneven and managerial, with significant regional variations.’ File photograph: Dylan Vaughan

The distressing scenes of sick, weeping children and their exhausted parents on RTÉ’s programme Living on the List created quite an impact. What was also notable was the variety of responses offered in relation to the question of what the principal cause of the waiting lists is.

The extent of the blame game is further illustration of a chronically dysfunctional health system that is not stitched together with an overarching sense of vision that can generate co-operation, fairness and even pride, despite the many brilliant people working in the system and the massive strides that have been made in the treatment of illnesses.

The situation prompts an invocation of the words of British minister for health Aneurin Bevan, who when fashioning a new national health service for Britain, insisted in 1948: “We ought to take pride in the fact that, despite our financial and economic anxieties, we are still able to do the most civilised thing in the world – put the welfare of the sick in front of any other consideration.”

That does not happen in Ireland and the reasons have much to do with the lack of firm purpose historically attached to the health services in contrast to the vision outlined by Bevan.

That is not to deny that the NHS in Britain is experiencing its own strains, crises and controversies about waiting lists, excessive bureaucracy and misplaced priorities, but they are not as bad as in Ireland, and at least underpinning the NHS is a historic fairness and hefty vision that gives it an added resilience and generates a sense of ownership and even respect.

Some found that nauseating and sentimental – especially champions of privatisation – but that it was included in the narrative was revealing about the NHS’s perceived status.

If the Olympic opening ceremony is ever held in Dublin, it is unlikely any tribute will be paid to the history of the Irish health service, because its history is one of turf wars, the appeasing of vested interests, church and lay, scaremongering about State interference, and politicians either loath to declare war on wantonness or else treated with contempt by senior medics who wanted to remain powerful, self-regulating elites.

At the other end of the medical scale, nurses were treated like, in the words of Dublin Jesuit Fr P J Gannon in 1942, the “ill-used step daughter of the community”.

That same year, John P Shanley, president of the Medical Association, suggested: “Nursing is essentially a work of self-sacrifice for which the reward cannot be here.”

Instead, a two-tier health service was allowed to become entrenched.

Over subsequent decades there was also a shift from a decentralised health system to a centralised and technocratic one, run along business and corporate lines, with a parallel reliance on voluntary and community organisations.

What was created was a health system that became extraordinarily uneven and managerial, with significant regional variations, heavily State subsidised private medicine and gradual extension of private hospital facilities.

The resultant hierarchies, bureaucracies and power imbalances are not only damaging to the medical profession, but also to the interests of patients; indeed one of the main themes of this week’s programme was the powerlessness of the patients.

And let us not forget that this year marks the 10th anniversary of the death of Susie Long (41) from bowel cancer due to the seven-month public waiting list for a colonoscopy.

She did not have private health insurance and in 2007, many tributes were paid to the courage Long demonstrated in devoting much of the limited time she had left to highlighting the crisis in our health system, hoping her personal tragedy could turn into a force for positive change.

Last year, however, colonoscopy waiting times had reached what the Irish Cancer Society called “a critical point”, with 44 per cent of public patients waiting longer than three months.

Doing “the most civilised thing” for those most in need is still, it seems, a pipe dream.