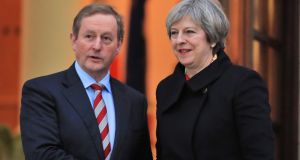 Taoiseach Enda Kenny with British prime minister Theresa May in Dublin last month. May “turned down the honour of addressing the Dáil” during her visit to the capital. Photograph: Colin Keegan/ Collins Dublin

At the start of this month David Davis stood up in the House of Commons and presented the government’s Brexit White Paper. Lacking substance in many vital areas, a notable omission was how the government will keep the soft Border in place between Northern Ireland and the Republic of Ireland after Brexit.

Instead, the government made a fleeting reference to the fact they will aim to “minimise frictions and administrative burdens”. This suggests that in one shape or form there will be an unwelcome return to checks at the Border.

There is a pattern here – the government doesn’t appear to be taking seriously the negative impact Brexit will have on the people of Ireland, just as it dismisses other widespread concerns about Brexit.

Her desperation for a trade deal with the United States is one of her own making. She chose a hard Brexit, pulling Britain out of the largest borderless marketplace in the world and alienating herself from Europe. Her choices on Brexit so far have been baffling.

Ireland will be one of the most economically damaged EU countries post-Brexit if the right deal is not done. Representing the fifth-largest market for UK goods and the largest for the North’s exports, the need to reach an agreement that safeguards both the UK and Irish interests is essential.

A “hard Border” if we leave the customs union will mean new tariffs and paperwork that will slow down trade, adding costs to consumers and businesses. Vague reassurances from Whitehall about the ability of “technology” to seamlessly check goods and services at Britain’s new land border with the European Union have not so far been reassuring.

One significant impact will be on cross-Border agri-food businesses. All the wheat that is grown in the Republic, for example, is sent to the North for milling, then re-imported south of the Border.

The likelihood of a special UK-Irish agreement to sustain customs-free trade is unlikely due to the EU’s exclusive competence to negotiate trade agreements with third countries.

In any event a new EU-UK trade agreement will take much longer to complete than the two-year period allowed for under the terms of article 50. In the meantime, it is vital that the British government confirms that Irish and other EU citizens continue to have the right to reside in the UK.

One of the most important underlying issues in this whole journey is how we protect the peace process in the North. Hardening the soft Border could create troubling effects politically, economically and socially.

As with many issues, the serious implications for the peace process were not given appropriate consideration during the EU referendum campaign. It is puzzling that the then Northern Ireland secretary Theresa Villiers, one of the key figures in the Leave camp, allowed this issue to be left largely unaddressed.

The government must be clear on their direction now. Despite promising that they will stand by their commitments in the Belfast Agreement, their previous pronouncement to remove themselves from the European Convention on Human Rights (ECHR) and to repeal the Human Rights Act appears to run in conflict with this.

The ECHR is a vital building block of the agreement – one of the many reason why I blocked Conservative attempts to undermine the ECHR when with them in the coalition government.

What is certain is that the increased implications of the vote on June 23rd for the Republic cannot be ignored. The Brexit negotiations must deliver the least disruptive, most workable solution to the operation of the EU’s new land border with the UK in the island of Ireland, and once the final Brexit deal is on the table the British people should be made clear of these implications and get the final say on whether it is right.

We owe it to everyone on each side of the Irish Sea to make this work for us both.