Is it time for Sir Alexander MacDonnell to be restored to his perch in Dublin?

An Irishwoman’s Diary: ‘The statue was badly weathered, some of which dated to when it was in front of the Department of Education’ 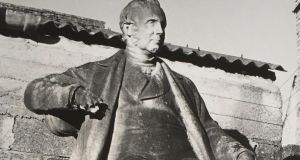 ‘I have recently been reliably informed that it the Alexander MacDonnell statue is still where I last saw it and is still weathered!’ Photograph: Paula Murphy

Continuing discussion about controversial sculptures – most recently the bronzes removed from in front of the Shelbourne Hotel – occasionally includes reference to those statues that disappeared from the city in the last century: the kings on horseback (William III, George I and II), the king’s viceroys (Carlisle and Eglinton and Winton), the king’s warriors (Nelson and Gough) and one queen (Victoria). But there is another statue that vanished from public view that gets no mention. Sir Alexander MacDonnell (1794-1875) sat on his pedestal in the grounds of Tyrone House (Department of Education), in Dublin’s Marlborough Street for nearly 80 years.

Alexander MacDonnell – long since largely forgotten – was the Resident Commissioner of Education in Ireland from 1839 until his retirement in 1871, and shortly after his death the Commissioners of National Education decided he should be commemorated in a statue. Local sculptor Thomas Farrell, who was responsible for many of the portrait statues in Dublin, received the commission. The statue, which according to the Irish Builder cost £1,200, was unveiled in August 1878. MacDonnell is portrayed in a relaxed manner with book and pencil (the latter long since lost) in hand.

Marble statues of this nature don’t simply disappear, so the chances were it had been relocated – but where?

MacDonnell had taken an interesting route to his lofty position in education in Ireland. Born in Belfast, he was educated in England – a scholarship child at Westminster School, followed by BA and MA studies at Christ Church, Oxford, where, according to the Dictionary of Irish Biography (DIB), he was a “brilliant scholar”. Further study at Lincoln’s Inn saw him called to the bar in 1824. But apparently too sensitive for the cut and thrust of the law, he abandoned it and returned to Ireland to head up the education system.

At the time of his death an obituary in the Freeman’s Journal (January 22nd, 1875) described him as having “scrupulous integrity”, being “kind an courteous to all” and earning the respect of even those who opposed him. The Irish Times (January 22nd, 1875), on its editorial page, indicated how “for forty years [30 surely!] he held in his hands the whole educational system of this country”. That he was a committed member of the Church of Ireland was well known, but the DIB informs us that MacDonnell believed in freedom of religion and pursued this path where possible in his education programme.

In the late 1980s I was making a study of the work of Dublin sculptor Thomas Farrell. This involved tracking down as many of his sculptures as possible. When I discovered that Farrell had carved a statue for Tyrone House, I made my way into the city to see and photograph it. To my surprise, there was no portrait statue in the grounds of the Department of Education.

A book on Dublin informed me that the statue was still in place in 1948, so it seemed likely it had been removed in the late 1950s, when the Carlisle, Eglinton and Winton and Gough statues were blown up. But marble statues of this nature don’t simply disappear, so the chances were it had been relocated – but where?

When the Queen Victoria monument was removed from the grounds of Leinster House in 1948, the sculptures were stored at the Royal Hospital Kilmainham (now IMMA), which was then home to the Garda Síochána, as well as serving as storage space for the National Museum. A photograph taken of the Victoria sculptures in the courtyard shows MacDonnell tagged along with them. But the Royal Hospital had been refurbished in the 1980s and, by the time I was undertaking my search, the sculptures were long since gone from that location.

An OPW storage facility in the city did not prove any more successful – but it was suggested that I might try a museum overflow building (former reformatory) in Daingean, Co Offaly. And so I set off for the Midlands. Locating the reformatory building, I made my way inside to inquire about the statue. I was promptly informed there were no sculptures on the premises.

Surprised but undaunted, I persevered in my quest and hearing someone say, “Try out the back!” – I did. Finally, I came face to face with the MacDonnell statue. It was still in the company of the Victoria bronzes – all seemingly dumped “out the back” with grass growing up around them. The sense of neglect was palpable.

The MacDonnell statue was badly weathered, some of which dated to when it was positioned in front of Tyrone House. But there was little doubt that more damage had occurred to the sculpture since that time.

I have recently been reliably informed that it is still where I last saw it and is still weathered! The statue of Queen Victoria is now in Sydney, Australia, and the bronzes from the base of her monument have all been returned to locations in Dublin. Is it time for MacDonnell to be restored and find a perch in the city once more?