Noises off (and on again): Listening out for the sounds of a new normal

‘It seemed like an overreaction to have the WHO intervene, although it being Geneva, I suppose, it could just as easily have been the UN’ 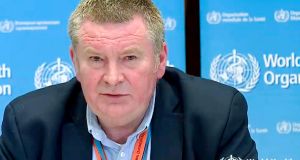 Facebook abhors a vacuum, so on my laptop it cut straight from Ballybay to a live Covid briefing from the WHO in Geneva. Above, WHO health emergencies programme director Michael Ryan delivering a Covid-19 briefing. Photograph: AFP via Getty Images

If you’re new to working at home and still missing the ambience of the office, well, inevitably, there is now an app for that. On a website called soundofcolleagues.com, a Swedish sound design company offers a menu of background noises typical of a workplace, which you can mix according to taste.

They include the patter of keyboards, telephones, the hum of a printer, and even “the office dog”. The overall effect is surprisingly pleasant.

One of the revelations of the pandemic, for me, was how effectively the fake crowd noises added by BBC’s Match of the Day compensated for the absence of actual people in stadiums.  If anything, I found it a slight improvement on reality.

The MOTD soundscapes rose and fell pleasantly, more-or-less in tune with events on the pitch, but without any of abusive chants or individualised vulgarities.

The office-sounds website works similarly.  There is no “annoying colleague talking too loud into the phone” anywhere. Even the office dog is agreeably modulated and, unlike your next-door neighbour’s dog when you’re working from home, you can always mute it.

Not everyone can soundscape, of course, especially when events are live.  For the GAA’s club championships, now underway with limited crowds, the challenges of Covid-19 include broadcasting from all-but-empty stadiums, where every individual utterance may be heard.

There was at least one such embarrassment during last weekend’s mid-Monaghan derby between Ballybay and Clontibret, which went out live on Facebook.

It led to an unusual but classy moment in which the commentator pardoned the speaker’s French – as it were – in Latin.  Apologising to listeners, he condemned the language as “infra dig”.

There was also a surreal development when the half-time whistle blew and the air went dead for the interval. Facebook abhors a vacuum, obviously, so on my laptop it cut straight from Ballybay to a live Covid briefing from the WHO in Geneva.

Yes, before half-time, the game had been marred by a series of incidents of the kind known locally as “mills”, which had also led the commentator to complain that players were forgetting the social distance rules while trying to lamp each other.  Still, it seemed like an overreaction to have the WHO intervene, although it being Geneva, I suppose, it could just as easily have been the UN.

In the wake of the Shelbourne Hotel incident, I am taking a new interest in the statuary of Dublin, much of which you can pass a thousand times without seeing.  So it was until now with a group of statues on the Custom House, representing the four known continents (circa 1791).

The figures – all female – symbolise Europe, Asia, the combined Americas, and Africa. And since that was an era when much international trade would have been morally questionable by today’s standards, one is tempted to search the statues now for signs of political incorrectness.

But apart from some strange headdresses of a kind that (pre-pandemic) you would only see at Galway Races Ladies’ Day, the sculptures have aged surprisingly well. America is represented by an indigenous woman, for example, while her African counterpart is strikingly proud.  Perhaps the only grounds for offence might be the absence of Oceania. Australia had only recently been “discovered” then, although of course it was already quite well known to those living there.

Speaking of international trade and sculptures, readers may recall my recent mention of the mysterious female head that presides over the Department of Enterprise in Kildare Street. No, she’s not an Egyptian princess. She’s the personification of Ireland and is said to have been modelled on Mary Barry, Cork tea empress and mother of former tánaiste Peter.

The sculpture dates from the 1940s, the same decade in which George Orwell wrote a famous essay entitled A Nice Cup of Tea, which laid out 11 “golden” rules on the subject.  Rule 1 was that the raw material had to come from “India or Ceylon”.  The Chinese kind had virtues, he admitted, but “ . . . ‘a nice cup of tea’, invariably means Indian.”

That may have been true then, when Barrys too looked to India for its imports. But as the ex-tánaiste himself recalled in an interview (with Sarah Carey in 2014), that all changed in the 1960s.  Since then, almost all the company’s tea, the famous Gold Blend included, is from Africa.

1 ‘I wandered around Dublin wondering: Is this what they call a capital city?’
2 Funeral of John Hume hears peacemaker ‘gave dignity and life to so many people’
3 Irish in Canary Islands: Life has changed dramatically
4 NPHET calls for ban on non-essential travel from countries with high Covid-19 rates
5 Fresh investigation into the murder of Michaela McAreavey in Mauritius
Real news has value SUBSCRIBE