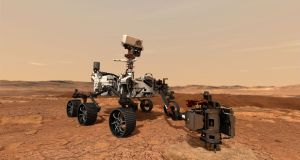 A Nasa illustration show its Mars 2020 rover as it uses its drill to core a rock sample on Mars. Photograph: Handout/ Nasa/JPL-Caltech/ AFP via Getty Images

Since the first storytellers slept under the stars, the red planet – close, visible, familiar and fierce – has fired our imagination. It has been a place of menace and of hope, an omen of death and the best bet for life beyond our own. We named it Mars, after the Roman god of war. Looking at that unattainable blood-red dot in the sky, we saw ancient civilisations, free-flowing canals and vengeful deities. Seldom did it stir more terror than in 1938, when a radio adaptation of HG Wells’s alien-invader epic The War of the Worlds, presented as a live news broadcast, threw its audience into panic.

Through feats of science and engineering, Mars has shed some of its mystery but none of its wonder. Through early missions in the 1960s, we found not those little green Martians but a freezing, barren world, zapped with radiation and covered in toxic soil. Yet we know that Mars is the only planet on which humans could one day settle, and so we persist in our efforts to understand it. This we know: some 3.5 billion years ago, Earth and Mars were quite similar. Both had the conditions to sustain life. But does that mean that life evolved on Mars? And could it mean that some form of life might still survive? If so, it would fundamentally alter our understanding of life itself.

And so we venture on. At the moment, Earth and Mars are aligned in a way that means the journey takes less than seven months. So in recent weeks, three separate missions – sent by China, the United Arab Emirates and, this week, the United States – have set off for the red planet. A cavalcade of vehicles, robots and helicopters will reach their destination early next year and begin their scientific experiments, all rooted in that same question: is there life?

Today, space exploration does not quite have the hold on the popular imagination that it once did. But from our over-heating world, gripped by a deadly pandemic, we will watch and listen as a robot scrabbles through the rocky soil 97 million kilometres away, and we will be reminded that, at some deeper level of our psyche, we still long for something outside ourselves.