Is democracy in the US still sound and resilient? 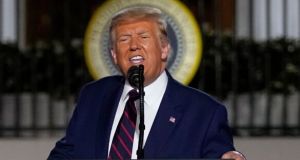 For nearly five years now I have been writing about Donald Trump, as candidate and as president. From the very beginning of his bid for the presidency, I was filled with fear and foreboding. There was something about him that seemed to threaten the very foundations of democracy in America and wherever it exists across the world. We are now in the last five weeks of his term of office. But the threat is still there.

Practically no printable adjective is excessive or unwarranted in describing this truly detestable man. Evil, amoral, loutish, cruel, self-obsessed, lying, arrogant, hating, greedy, cynical, and dangerous – these only tell half the story of the man.

But even in these last weeks, the danger persists that he may attempt to set aside the democratic rejection of his presidency.

How did America come to this pass? How come nine out of every 20 voters last month supported his failed bid for re-election? They had a perfect opportunity over four years to assess Trump

The New York Times revelation that Trump summoned General Michael Flynn, the former national security adviser and convicted felon whom he sacked for lying and has recently pardoned, to a meeting in the Oval Office attended by the monstrous legal fantasist, Sidney Powell, and at which was discussed the possible appointment of Powell as special counsel prosecutor to investigate voter fraud, the seizure of voting machines, and Flynn’s suggestion that the November election in certain states might be re-run under martial law, is all truly awful.

How did America come to this pass? How come nine out of every 20 voters last month supported his failed bid for re-election? They had a perfect opportunity over four years to assess Trump. They saw all the lies, all the sackings, all the idiocy over coronavirus, all the chaotic international diplomacy – from Khashoggi to buying Iceland, from subverting the European Union and Nato to backing Netanyahu, Bolsonaro and Duterte. They saw him cosying up to the militias, the Proud Boys, QAnon and the racists. They saw him abjectly fail to deal with the pandemic.

What is it about him that his voters found so attractive? His coalition seemed to be built on a spectrum of reactionary emotion. Ultra-conservative Catholics and evangelists, the greedy wealthy and the fearful have-nots (who want to remain on the second-lowest rung of the social ladder, one step above the immigrants), all made common cause with those who put deficit-led economic growth ahead of tackling growing inequality.

And the truth is that this coalition would probably have had a convincing win over a fractious Democratic Party’s candidate were it not for the pandemic. The religious right might reflect on the reality that divine providence allowed the pandemic to rob them of their dream result.

We have learned in recent days of a massive hacking attack on US governmental IT systems in which malware bombs have been seeded in the cyber infrastructure of American administrative bodies.

The as yet unsacked secretary of state, Mike Pompeo, must have hugely disappointed Trump when he said last week: “We can say pretty clearly that it was the Russians that engaged in this activity.”

However Trump, ever anxious to deflect attention from Putin’s Russia, tweeted that the cyberattack was being exaggerated by the fake media. “Russia, Russia, Russia is the priority chant when anything happens because Lamestream is, for mostly financial reasons, petrified of discussing the possibility that it may be China (it may!).”

It is increasingly hard to discount the suspicion that the Russians hold what is termed kompromat on Trump. His own department of homeland security had called the massive hack a grave risk to America’s IT critical infrastructure.

Trump nonetheless tied the hack to his stolen election theory, tweeting: “There could have been a hit on our ridiculous voting machines during the election, which is now obvious that I won big”.

So there you have it – China sent the “China plague” to sabotage Trump’s efforts to make America great again economically and then China robbed him of victory by hacking the voting machines, with Venezuelan assistance!

Racism, extremism, xenophobia and anxiety are gnawing away at the very beams and boards of democracy

Trump still clings to the demented theory that he won the November election. So does the group of hard-bitten fanatics still left in what remains of his inner circle. So does the group of wealthy donors who have contributed $250 million (€204 million) to his coffers to persuade the courts to invalidate Biden’s victory.

Is the edifice of American constitutional democracy still sound and resilient? One would like to think so. But that edifice is showing signs of an unaddressed political termite attack which threatens the structure. Racism, extremism, xenophobia and anxiety are gnawing away at the very beams and boards of democracy.

The irony is that the malign forces which have now been released or unmasked seem to be aided and abetted by the cyber revolution. If the print media and the broadcast media can be dismissed online as fake, the implication must be that some other medium is more genuine and reliable. On the evidence, that implication is false.