In the bleak midwinter? An Irishman’s Diary on the date of the Nativity 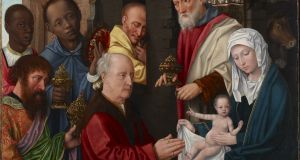 The Christmas story has always been impervious to anything as inconvenient of the facts of what actually happened. For millennia biblical scholars have sought to ascertain the exact date of Jesus’s birth from the few often vague and contradictory clues in the gospels and have emerged none the wiser.

We do not know the day, the month or the year when Jesus was born, but we know certainly that he was not born on December 25th in the Year 1.

Anno Domino (AD) 1 cannot be the year of our Lord because Jesus was born during the reign of Herod the Great, according to both Luke and Matthew, the evangelists responsible for the Nativity story. Herod died during the period of a lunar eclipse shortly before Passover, according to the Roman historian Josephus.

The dates we now use, the date that appears in the top left-hand side of this page, is based on the calculations of a sixth-century monk named Dionysius Exiguus.

He sought to find a replacement for the old Christian calendar which was based on the years since the beginning of the reign of the Roman emperor Diocletian, the last emperor to persecute Christians. He died in 311.

Prior to that, dates had been calculated in the Roman Empire using Ab urbe condita (from the founding of the city), the date of the foundation of the city of Rome in 753 BC.

Dates in antiquity were also calculated according to the year of the reign of an emperor and the dates of the two pro-consuls elected in Rome on an annual basis.

Dionysius Exiguus calculated the year in which he devised the Anno Domino method of dating was 525 years “since the incarnation of our Lord Jesus Christ”.

He offered no further explanation as to why he picked that date, but it stuck. The first popular mention of BC/AD is in the Venerable Bede’s Ecclesiastical History of the English People in 731 and it gained currency first in England and then across the Christian world.

In recent years the terms BC and AD have been replaced by the more politically correct but inelegant terms BCE (before the common era) and the CE (the common era), so-called because all nations use the Christian system.

The problem with Dionysius Exiguus’s calculations is that the lunar eclipse referred to at the same time as Herod’s death occurred in March of 4 BC. Jesus had to have been born before that date.

We now have the incongruous situation where Jesus was born at least four years before he was really born, according to the calendar developed in his his name.

Other aspects of the gospel have been used to speculate about the date of Jesus’s birth. The shepherds who watched their flocks at night are not likely to have done so during the winter. The Judean hills, despite their Mediterranean location are cold in December and lambs are born in the spring.

There is another clue in the gospel of Matthew in which three wise men from the east come to Jerusalem saying, “Where is he who has been born king of the Jews? For we have seen his star in the East, and have come to worship him.”

They follow the star until it comes to rest over the place in Bethlehem where Jesus was born. This is the original Christmas star and it brings to mind the one that has appeared in our skies this week, the super-conjunction of Jupiter and Saturn, the closest pass visible in our skies since the 13th century. The two gas giants appear so close as to almost resemble a single star.

To the ancients, planets were wandering stars moving against the backdrop of the skies. The word planet comes from the ancient Greek word for wanderer.

Hence the original Christmas star, if it ever existed, had to be a planet or planets.

Curiously another conjunction of Jupiter and Saturn occurred in late December 1603 and was observed by one of history’s greatest astronomers Johannes Kepler, whose groundbreaking research into planetary motion did so much to enhance our understanding of the solar system.

Kepler was both a Christian and a scientist and saw no contradiction between the two. He took the account in Matthew as the gospel truth and set about calculating when Jesus was born.

Kepler believed the “three wise men” to be astrologers from Chaldea (near Babylon)and had first observed an apparent conjunction of Jupiter and Saturn on June 22nd, 7 BC.

There followed a series of conjunctions between the two planets and also Venus. The star of the Magi was seen for the second time in Jerusalem about February of 5 BC.

Today we understand the journey of the Magi in theological terms. Nobody goes looking for the Christmas star any more to guess the date of Jesus’s birth.

Yet the ancients would see huge significance in such a conjunction and as a portent of great events. Few of those events would be happy ones.

They would have undoubtedly associated the Covid-19 global pandemic with the great conjunction of Jupiter and Saturn and determined that this was some form of divine punishment for the multiple inequities of mankind.

Today we know the movement of the heavens have no bearing on human affairs.

Yet, as we look up at the giant planets doing their celestial dance this week, we are reminded the affairs of mankind are but of tiny consequence in the vastness of the universe.