Brexit: Scotland is the key to what happens with Northern Ireland

An EU alliance between Ireland, NI and Scotland could avert Brexit disaster 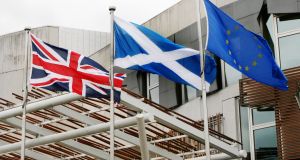 At no other time in the post-partition history of Britain and Ireland have all five nations faced the current level of constitutional challenge. Brexit, brought on by the UK vote to leave the European Union supported by two of its four nations, is already cracking under the heavy weight of its irresponsibility.

With calls for a Scottish independence referendum and an Irish Border poll growing louder, queues of lorries at customs posts growing longer and tens of thousands of British citizens applying for Irish passports, the potential for confusion leading to chaos is alarming.

Combined with the catastrophic impact of coronavirus and the impoverishment of the most vulnerable, Brexit can only be described as a disaster waiting to happen. It threatens the integrity of the UK and the stability of the Irish peace process. It has put food imports and supply chains to the UK and Ireland at risk and it has curtailed the freedom of British citizens to live, work and retire in the EU many love to hate. In global terms it has already shaken the standing of the UK and could eventually reduce Britain to a shadow of its former self.

Northern Ireland has been in the eye of the Brexit storm for five long years and is likely to remain so for many to come. The centenary of the creation of Northern Ireland in 1921 could not have come at a more pivotal moment for a nation bedevilled with conflict since its inception. The Belfast Agreement has delivered almost a quarter of a century of relative peace but its very foundation has been shaken by the impact of a decision in 2016 that erroneously promised the UK a swift departure from the EU to a land of milk and honey.

In the face of these and other apparently unintended consequences of UK withdrawal, the people of Britain have three possible choices. In true British “Keep Calm and Carry On” tradition, some may learn to grin and bear it in the hope that a new global trade deal will one day see Britain through. Failing that, others could find a way to reverse the decision and return to the EU with a new understanding of its value. Energised by the inability of Brexit to deliver the promised land, they could look to Labour to hold a second referendum to establish Britain’s European destiny for once and for all. Or, in the spirit of European compromise, seek a creative solution that might serve to satisfy everyone.

That “creative compromise” may lie with Scotland. An independent Scotland welcomed into the EU with open arms would leave England and Wales reminiscent of a headless chicken, cut off from their nearest neighbours, isolated and alone. It would also leave Northern Ireland out on a limb more susceptible than ever to increasing pressure for a move towards a shared or united Ireland. If that were the case, the possibility of the three nations that support EU membership coming together to form an arrangement between Scotland, Ireland and Northern Ireland could be a worthy alternative.

This new Celtic association, proposed by an Irish academic in the aftermath of the Brexit vote, would play a role within the EU similar to the Benelux countries – Belgium, the Netherlands and Luxembourg – which were founding members of the original European Community. The advantages in terms of access to EU markets, cross-border trade, historic ties and close cultural connection could override the difficulties posed by a new border between England and Scotland. By bringing Scotland into the North-South Irish equation, the alliance could help strike a balance between divided loyalties in Northern Ireland. This would take time to evolve, but a solution that sees three of the five nations remaining or returning to the EU, while England and Wales set their sights on a global prize, is a compromise fit for any of its founding fathers.

Northern Ireland would be at the heart of the solution and rightly so. Its experience of conflict and peace-building is a microcosm of the story of the European Union. It is perfectly placed between Britain and Ireland to become the link between two countries destined to grow apart as the Brexit withdrawal takes shape. Also, sitting at the crossroads of Europe and the US, with historic ties and vested interests on both sides, Northern Ireland is well placed to help bridge the transatlantic divide in a western alliance built to meet the challenges of the 21st century. Because of their global reach, coronavirus, climate change, radical extremism and world poverty can only be combated by acting together.

The long history of Northern Ireland’s role in the future of Europe dates back to the sixth century when the Irish pilgrim Columbanus, known as the “White Dove”, set sail for the Continent from Bangor in Co Down. He was the first to give Europe its name and is today regarded as the patron saint of European unity.

Centuries later, Winston Churchill described his vision of Northern Ireland in his famous postwar speech that set the stage for European unification.

“The whole map of Europe has been changed ... but as the deluge subsides and the waters fall short we see the dreary steeples of Fermanagh and Tyrone emerging once again.”

As they stood at the start of the European journey, those “dreary steeples” set the scene alongside the proud cranes of Belfast’s shipyard, the high walls of Derry, the drumlins of Down, the stones of the Giant’s Causeway and the mountains of Mourne on the horizon of Europe pointing the way forward for a continent with a mighty role to play in the world.