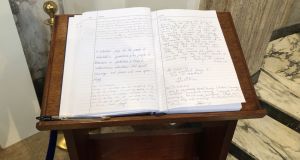 Even a charity shop on Dublin’s Aungier Street was getting into the St Valentine’s mood this week. Second-hand objects in the window display ranged from “The Love Album” (parts 2 & 3) to a pair of scarlet-red stiletto heels. Then there was the box of paperback books outside, which was also dominated by romance, although that may be the case most weeks of the year.

You probably wouldn’t be buying the books as Valentine presents because, apart from them being obviously second-hand, they were for sale at 50 cent each, which might be considered unromantic.

In any case, among their many variations on the theme of love was a story about two single parents, living thousands of miles apart, who find themselves connected by fate.

“Life is short – sometimes you have to take a chance,” read the blurb on the cover, which also quoted a rave review from Good Housekeeping magazine. Speaking of which, alongside the high heels in the window was a fondue saucepan, also in scarlet. They looked almost like a set, but again, you might want to think twice before giving anyone that as a present.

Despite the legend associated with Valentine, the messages addressed to him are not all about romance and its complications

The charity shop was next door to Whitefriar Street church, which is famous for, among other things, having the actual remains of St Valentine. Those were themselves a gift once – from Rome to Dublin, when the modern church was built here.

And for related reasons, the church too has books on display, also dominated by the theme of love. But in this case the books are hardback and not for sale. Another difference from next door is that they are still being written. That’s because the authors are the daily visitors to the church, from all over the world, and the stories they write in them are prayers.

They don’t have to write their prayers anywhere. If you’re a believer, you could address St Valentine in person, silently, confident he would hear.

But there seems to be a therapeutic value to writing your problems out on paper, for others to read too. The church obliges by providing notebooks and pens.

Despite the legend associated with Valentine, the messages addressed to him are not all about romance and its complications. On the contrary, subjects range widely, from family problems to the troubles of the world. But in most cases, the writers are clearly opening their hearts. And like the paperbacks next door, the hearts tend to be second-hand, sometimes even a bit battered.

Many writers opt for anonymity, like the person who left the most conventional message this week: “Grant that I may be lucky in love”. Most give at least a first name. And one female petitioner of late included the full name of her problem, as if hoping he would hear about it. Her message was: “Make him wake up […] apologise and rekindle the love we had.”

But then, by contrast, there’s a woman suffering from depression who prays only that she can “stay out of bed” and that in the meantime the saint will look after her husband “who cares for me no matter how I behave”. Someone else invokes help for the entire country, which is “full of bitterness, despair, and hatred”.

Another asks the saint to “let mankind learn to love mankind”. But sharing a page with that is a much more local appeal, prayer and protest all in one, that probably appears in the book every February. It demands justice for victims and survivors of the Stardust tragedy of St Valentine’s Night 1981.

That’s not the only note of anger in the book. A tortured soul unnamed has written: “Someone will have to explain to me how the love of my life was allowed to suffer horribly for eight years with cancer before passing away. That’s not a God I’m interested in.” Two other writers have since taken up the challenge, responding with messages of advice and sympathy.

It’s not just St Valentine who gets the book treatment.  There’s another at the shrine of St Jude nearby which, even this week, is equally busy. Indeed, their portfolios appear to overlap. One woman has asked the apostle to help her meet “an honest, decent, trustworthy man who will become my husband”.

But St Jude attracts an equally wide variety of requests. Another supplicant seeks his help for a nephew with addiction. Someone else asks him to “remove my son from Instagram and Facebook and restore his peace of mind”. And invoking his main speciality, a woman named Siobhán, who may or may not have been talking about herself, writes simply: “Dear St Jude. Pray for a hopeless case!”