School defects are a symptom of negligent State practices

Issue has raised serious questions on regulation in the construction industry 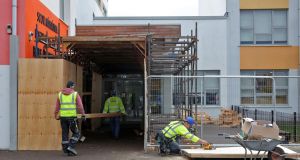 Builders carrying out remedial work at Tyrrelstown Educate Together School in Dublin earlier this week. The school closed to pupils last week due to building defects. Photograph: Colin Keegan/Collins

The discovery of structural defects in schools has caused widespread concern in recent weeks. Remedial works are required in 23 of the 42 “rapid build” schools inspected. In one case, engineers estimated there was an 80 per cent chance of partial collapse in storm-force winds. Lives have been put at risk and it raises serious questions about the construction industry – both its practices and regulation – in Ireland.

Construction is not simple; it is inherently complex and risky. Projects are cost driven, time sensitive and labour intensive. Materials, technologies and regulatory standards change and buildings are put together in all weathers by ad-hoc teams. There are many things that can go wrong, some of which are safety risks, others that can be difficult and expensive to fix.

Minister for Education Joe McHugh has launched an inquiry that will determine which – if any – of these factors were involved in the current spate of school closures.

But what is clear is that the construction industry is still largely left to regulate itself; the statutory “certifiers” introduced in 2014 are appointed to inspect on the owner’s behalf, not to protect the public. Significantly, they do not have powers to enter a site, to stop the works or to take enforcement proceedings.

Although shortcomings in the regulations to protect people are evident, the failure to protect the State’s investment also deserves scrutiny. The Minister anticipates that costs will be recouped but nobody can say when, if or how the defects and disruption will be paid for. As many homeowners who bought defective properties can attest, identifying who is responsible is different to establishing who, if anyone, is legally liable.

Even where liability is eventually assigned, funds may not be available to remedy the problem and to pay legal costs. There are no statutory consumer protections for building work in Ireland.

As both the author of this policy and as the largest “buyer” of new buildings, the State could have done more to prevent these situations, but did not.

This latest failure is therefore not an unfortunate event, but symptomatic of systemic policy deficiencies in how construction is regulated and, critically, how the public sector arranges the construction of new buildings.

Procurement is the way that the State buys its buildings. Good procurement practices are about defining, negotiating and delivering the job properly at the best price. Done effectively, it is also about managing risks and anticipating problems; being vigilant and, at times, actively intervening. However, a 2016 study found that just 10 per cent of public buyers have procurement as their full-time job and fewer than a quarter had procurement-related qualifications.

Traditionally, the construction industry had checks and balances – architects and engineers kept a watching brief to protect the owners’ interests and had the tools to manage build quality. So, value for money was balanced with cost; builders were only expected to carry the risks that they could control; subcontractors were selected on their track record as well as their price. In short, the long-term investment in the building took precedence over expediency, and standards in the industry were supported, not undermined.

It is telling that a long list of failures has occurred where procurement practices deviated from these traditional arrangements. Both structural defects and delays are primarily procurement failures, and we can learn from them.

Earlier this year, the collapse of UK contractor Carillion, part of a consortium providing five schools in Ireland, caused significant disruption and contagion across the construction industry.

The impact of this collapse is significant and far wider than one contract – a further 18 planned schools are delayed and will incur additional cost; more than 100 subcontractors and other suppliers are unpaid, because the contract did not include protections for them; compliance documentation is compromised; construction employment and training are destabilised; and thousands of children are without adequate facilities. These risks were foreseeable and could have been mitigated.

Ways to do this include not favouring procurement that bundles contracts to reduce competition, outsources control in “design and build” contracts, accepts below cost bids, promotes value engineering, removes safeguards, undermines SMEs and prioritises cost over quality.

An incident in Scotland resonates with recent events in Ireland. In 2016 the wall of an Edinburgh school collapsed due to the absence of wall ties. Subsequent investigations found defects in 17 other recently built schools.

As with the Irish schools, they were procured under a design and build contract. An independent inquiry found that where the builders determine the role of the architects and engineers they are unwilling to pay them to inspect their work and there is a drop in this crucial activity.

The Scottish inquiry recommends that public bodies become “intelligent customers” investing in independent scrutiny and procurement that optimises quality in design and quality in construction. It warns: “In seeking to transfer as much risk as possible away from themselves in relation to the design and construction of facilities, public bodies should understand that they cannot delegate to others the duty that they ultimately owe to the public to ensure the provision of a safe environment.”

Lessons learned should not be limited to schools procurement. The critical challenge is to translate this into more robust practices in the housebuilding programme, where the risks are even higher. Government departments, local authorities and approved housing bodies are under considerable pressure to deliver housing at scale, quickly and at low cost, as happened with the schoolbuilding programme in 2009.

It is only through good fortune that this wake-up call has come without a loss of life.

Orla Hegarty is assistant professor at the school of architecture, planning & environmental policy at UCD