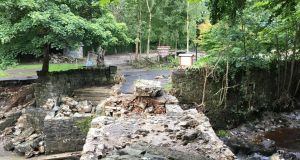 “At some stage.” That was Taoiseach Leo Varadkar’s response on budget night to the question of when a meaningful carbon tax might be considered. Other issues, apparently, are more pressing than climate change, and the Government is happy, it appears, for Ireland to be drowned, blown and scorched beyond recognition. With the refusal to take climate change seriously, the gulf between rhetoric and action has grown to farcical proportions.

Just two weeks ago, Minister for Foreign Affairs Simon Coveney addressed the UN General Assembly: “Geographically, Ireland may be a small island on the western edge of Europe. But in Ireland we see ourselves as an island at the centre of the world … In an interdependent world, the challenges of our time do not respect geographic boundaries. Finding solutions is a shared responsibility, whether you are a small Polynesian island or a superpower – we breathe the same air … Since I spoke here last year Ireland has experienced its first hurricane, its most severe winter cold weather snap and the most sustained drought in living memory. The denial needs to end and the collective action on climate adaptation and abatement must intensify.”

In 2017, Coveney began a similar address by extending condolences to the representatives of people in the Caribbean islands “who are facing extraordinary difficulties following the recent relentless hurricanes”.

These addresses were to the same UN that is part of the Intergovernmental Panel on Climate Change that has just warned the world has only 12 years to avoid a climate catastrophe. But what is much more important, it transpires, is that the Irish parish pump is attended to, and the pun is intended. Supposedly “prudent” Paschal Donohoe, rather than face the climate change catastrophe, stated piously on budget day, “It is my intention to put in place a long-term trajectory for carbon tax increases out to 2030 in line with the recommendations of the Climate Change Advisory Council”. What the Advisory Council had sought was the introduction of a proper carbon tax in the budget and that it be more than doubled by 2030, if there is to be any chance of decarbonising Ireland in the coming decades.

Kevin “Boxer” Moran, Minister of State for the Office of Public Works and Flood Relief, surely has his ideal job given that he ran for the Dáil on the back of this very issue. In May, after continually emphasising the need for a “drastic” increase in flood relief measures, he published a Flood Risk Management Plan and announced €257 million for 50 new flood-relief plans so that “we are tackling the greatest risk nationally … We must all deal with climate change; we cannot ignore it. It is coming down the tracks.” But he did not insist on an increased carbon tax in the budget; the cause of unprecedented flooding, it seems, can be left to one side.

Consider also Senator Paul Daly of Fianna Fáil who, in a good summation of the approach of too many of our political class, told the Seanad in March: “I will not get into the debate on climate change, but flooding seems to be occurring more frequently.” Why not get into the debate, Senator Daly? Is it because you are a Senator on the agricultural panel and home truths are not allowed when it comes to climate change and Irish agriculture?

And what of Minister Shane Ross, who last year published Developing Resilience to Climate Change in the Irish Transport Sector, the first climate change adaptation plan for the transport sector? He told us: “It is vital that the transport sector now positions itself to put in place measures to plan for the negative effects of climate change and take suitable action to limit potential damage in the future.”

It is also part of this black comedy script that Leo Varadkar stated in June that the country will become a global leader in protecting the planet and making it “healthy and great again”. He boasted about a €22 billion “commitment” for climate actions as part of a national development plan: “The Government does not underestimate the scale of the challenge ... Earlier this year I talked about the need for Ireland to be a leader in climate action – and I meant it.”

And let us not forget Denis Naughten, the minister who, until he resigned on Thursday, actually had climate change – the gravest issue of our time – as part of his ministerial brief. He has expressed his “frustration with the lack of progress towards Ireland’s climate change targets for 2020. In this respect, the latest projections of greenhouse gas emissions, published by the EPA in May 2018, are deeply disappointing … the Government is doing everything it can to ensure that we, at an absolute minimum, meet our 2030 target.”

All a joke, but one that is not remotely funny: a government that sees Ireland “at the centre of the world” but cynically and wilfully ignores what is destroying that world.