Diarmaid Ferriter: Nuns’ side of story needs to be heard 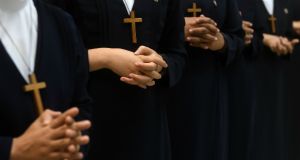 Just what is the nuns’ story? That is a question I’ve often pondered when absorbing the revelations of recent years about Ireland’s reliance on institutions, the things that went on within them and the social, economic and cultural currents that bordered them. There has been much testimony from survivors of abuse and numerous declarations of sorrow from politicians reacting to the publication of the reports of various State-initiated inquiries. While some religious congregations have also expressed sorrow and issued apologies, we have not got enough sense of the perspective of the religious sisters involved in running institutions, including the mother-and-baby homes, back in the spotlight again following the decision to excavate the site of the Tuam home.

The announcement that the Bon Secours order, which ran the home, will contribute €2.5 million to this delicate project was not accompanied by any information on how such a sum was arrived at, what was involved in negotiating it and what the perspective of the religious order on all this is. That in itself is problematic given the inadequacy of previous arrangements between the Catholic Church and the State for reparations and the lack of detail provided about how the deals were struck. All we were told during the week is that the Government had agreed to this “portion of the cost” of the Tuam exhumations. Victims of these institutions and their relatives are likely to see this sum as far too little, but the shadowiness of the nuns in all this just compounds the problem of trying to get a sense of what their take on this whole issue is.

Those seeking information on the Bon Secours today will mostly be provided with information on their hospitals and health projects as Ireland’s largest independent hospital group. Only scraps of their history are offered on their website, tied up with the assertion that central to their mission since the 19th century (and their presence in Ireland since 1861) has been care for the sick and dying “of all classes and religions” including, more recently, helping the poor in Peru and working with Aids sufferers in Africa. We are told the sisters were invited to nurse the sick and poor in Tuam in 1885 and the Galway narrative then jumps straight to 1944 when the order established a nursing home.

Its own highlighting of the order’s compassion, care and concern for the dignity of the vulnerable will generate an understandable response from those who feel it failed to live up to that in relation to the mother-and-baby homes. But its own silences and selective imparting of its history does it no favours as it enhances the caricature of the “bad nuns” that has developed in recent decades.

The same could be said of the reluctance of too many religious congregations to open up their archives. Archivist Catríona Crowe has argued there should be a religious records repository under State control with due input from the church given the extent of religious orders’ involvement with educational, health and institutional care in partnership with the State and through the use of public funds. Crowe maintains their records should be seen “not as private records . . . but as public records which should be available to anyone who wishes to see them, as official records are”. This is also relevant to the religious orders being investigated by the ongoing Commission of Investigation into Mother and Baby Homes.

The latest edition of the Jesuit quarterly Studies publishes various articles from a conference last year on the history of women involved in religious life and emphasises the need to establish “foundations for a fuller narration” of the nuns’ stories, but also to rescue the word “nun” from what is referred to as the traducing of the “reputation of the many thousands of immensely dedicated Irish women who were traditionally called by that name”. The terrible damage that was done by some nuns purporting to act in the name of the gospel is acknowledged, but it is argued that those failings have been “allowed to become the whole story” and UCD’s Deirdre Rafferty, a historian of education, highlights a “vast, and largely undocumented legacy” in the fields of healthcare, education and the missions.

We certainly need more balance and the avoidance of cartoon depictions of any congregation, but religious congregations need to play their part. Some progress has been made: many of the archival collections of the Sisters of Mercy are now centralised in Dublin; and, in Cork, Nano Nagle Place houses the Presentation Sisters’ congregational archives. But there are other congregations doing little if anything and there needs to be a more concerted effort to safeguard these sources and make them accessible to do justice to a complex history and come to terms with it by establishing a meaningful context. This should be matched with the breaking of the contemporary silence about the details of agreements that should not be private.