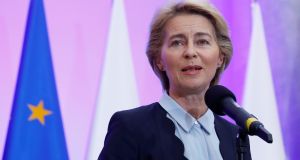 The election of Ursula von der Leyen as the first female European Commission president looks set to shine a light on gender balance in Irish political and cultural life. She has been elected on a platform to introduce a 50:50 gender balance among European commissioners, and intends to break the glass ceiling by setting gender quotas for European Union corporate boards. She sounds like she means business.

Leaving aside the question of commissioner quotas, raising the broader question of gender identity in European politics is timely. Europe as a whole faces disruptive pressures from populist and authoritarian hard men such as Vladimir Putin, Donald Trump and Xi Jinping. Boris Johnson potentially joins their ranks, even though he is a little fluffy around the ideological edges. Populism seeks to make complex issues seem simple and tends to appeal to the lowest common denominator, as we saw with Trump’s recent overtly racist outbursts. Liberal democracy is under threat, and the fear is that the rights of minorities and women to participate fully in public life may be next.

The key pillars of Irish public life – our legislature, our universities, the church and the law – have all acted as bastions of male privilege for centuries

We therefore need to make the intellectual case for a full participatory role for women. I will desist from using the F word, but feminism is not so much the demand for absolute equality as the demand for equality of opportunity with men. We seek a level playing field; only then will the brightest and the best rise to the top – irrespective of gender. At best the genders complement one another and bring different skill sets to the table. And while that may sound simple, the fact is that most elements of our culture militate against it.

The key pillars of Irish public life – our legislature, our universities, the church and the law – have all acted as bastions of male privilege for centuries. Attitudes of inherent male superiority are deeply ingrained and will not be changed overnight, but change they must.

The current female representation in the Dáil (22 per cent) is the highest in the State’s history. The previous Dáil was 15 per cent. Such improvements must be welcomed. Prior to that we hardly ever made double figures. But we are still languishing far behind our western European neighbours. The current figure for Sweden is 46 per cent, Norway 41 per cent, France 40 per cent, Denmark 37 per cent. Italy and Spain, with whom we share a Catholic history, are 36 per cent and 47 per cent respectively. Currently, we are ranked at 81st in the world on this issue. Hence, we should certainly not get too carried away with our recent progress.

Can we go so far as to say that Ireland is institutionally patriarchal? Absolutely

Gender prejudice is still alive and well in Irish politics, but it is more insidious than deliberate. These attitudes are deeply ingrained, in women no less than in men. The phrase – “the right man for the job” is one I’ve heard far too often, especially when I was running for local office in the recent elections. The experience was enjoyable but ultimately unsuccessful, pipped as I was at the post by a deserving Green.

The rules stipulate that, to qualify for full State funding, the political parties must have a minimum of 30 per cent female candidates for Dáil elections. This figure rises to 40 per cent from 2023. Note that this is only a candidate requirement, not an actual elected TD requirement. And I don’t believe that one has to be overly cynical to imagine how, in some instances, women may be put forward for unwinnable seats to massage the figures upwards.

Still, it is a start – more than is being done in other areas of public life. For example, there is still no obligatory reporting on gender pay gaps, though legislation for this is in train. When it does come in, it is likely to show a gap of about 15-30 per cent, depending upon the sector. That is quite a shocking figure, and little wonder that Von der Leyen seeks to bring in corporate quotas as a push back against this. She may choose to base her recommendations on the Norwegian model of 40 per cent female composition of publicly listed companies – on pain of dissolution for those failing to comply.

Can we go so far as to say that Ireland is institutionally patriarchal? Absolutely. We all know what the Constitution says about where a woman’s place should be. Key pillars of Irish public life, such as the universities (where I work), the law, and the church are profoundly male-oriented. Nevertheless, there has been a willingness to engage of late, though probably due more to external pressures (such as the EU and globalisation) than any real attempt to change from within.

So, where does this leave us? I suggest, wearing my teacher’s hat, on a grading system, Ireland is about C minus. Improvements have been made, but so much more needs to be done. The idea that entitlement is due to male birth right and privilege is a subconscious cultural and historical belief that needs to be challenged directly by society.

If it takes legislation to enforce this cultural shift, then so be it. For me, it cannot happen quickly enough. That is why Von der Leyen’s election as the first female president of the European Commission gives me hope of a fairer future for women in Ireland.