I used to play the uilleann pipes. But it wasn’t worth a kneecapping

Irish politics has matured. The island of Ireland should have room for all our cultures 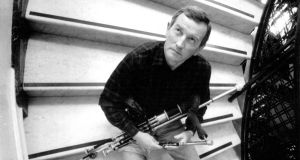 Inspirational: the uilleann piper Liam O’Flynn – whom I took a hornpipe off – in 1990. Photograph: Steven Siewert/Fairfax via Getty

I once heard an awful joke about the bagpipes: they aren’t a musical instrument; they’re a breathalyser. Blow into them, and if the sound that comes out doesn’t make you want to kill yourself, you aren’t drunk enough.

I was born into a Protestant family in Belfast in 1965, so it was no surprise, when I went to Campbell College, that my father declared I would learn to play the bagpipes. I was sceptical, but as soon as a practice chanter was thrust in my hand, I was entranced.

Of course, the great Highland bagpipe is in Irish terms a symbol – of Scottish planters and British army regiments. But anyone who has experienced a pibroch competently played cannot deny the mesmeric beauty of the instrument. As a young man I had no head for such symbolic politics: playing the pipes was a path to popularity and free drinks for life.

My father giving me a set of uilleann pipes was a profound statement. He was a Northern Irish judge and had been the minister for home affairs in Stormont in 1969

All that changed when I opened a present from my father and out popped a new chanter and bag. My heart leapt. It was a set of uilleann pipes. As I am a Highland piper, my fingers were full of the Scottish repertoire, but I had listened to The Chieftans, and Liam O’Flynn playing The Brendan Voyage, and had attended a concert by Robbie Hannan, and I was convinced of one thing: the uilleann pipes were more versatile than their Scottish counterpart.

My first tune was a salute written by the harpist Turlough O’Carolan, called Fanny Power. O’Carolan was blind, so as I practised I couldn’t help imagining Power’s mellifluous voice, or the delightful lines of her face, which had induced such a gorgeous tune. I was entranced with the instrument, and piping came naturally to me, so I was soon a good intermediate piper. But that quickly drove me into the buffers.

My father giving me a set of uilleann pipes was a profound statement. He was a Northern Irish judge and had been the minister for home affairs in Stormont in 1969. He was a reforming unionist, having been Terence O’Neill’s right-hand man. What he was telling me was that he believed Ireland’s cultural psyche could transcend sectarianism.

Inspired, I signed up for Willie Clancy week, the piping festival in Co Clare. I skipped into my first lesson full of hope. Then someone muttered, “Here comes Britain.” I felt intimidated; somehow I was an outsider, an Ulster Prod who, notwithstanding his enthusiasm, was unwelcome. A cultural trespasser.

From that moment, every time I went for a lesson I could hear the murmurs and feel the disapproving stares. I suspect some of it was paranoia, but some of it definitely wasn’t. One evening I was chatting to a girl in the pub when I overheard her friends commenting disapprovingly, “I don’t know what she’s doing with him! He’s C of E!”

I kept at it, however, and became good enough to participate in sessions, leading me to Belfast’s nationalist pubs. One evening I was at a nationalist bar when someone told me there were some guys who were very unhappy I was there and I should leave immediately.

My enthusiasm for the uilleann pipes quickly waned; I didn’t really see the point of playing them if I couldn’t express myself properly. And I didn’t want to end up with a kneecapping – or, worse, endanger my dad – so my love for the uilleann pipes was soon extinguished. Gradually they petered out of my life. I have little doubt that I would have become a highly competent uilleann piper, although I might have found the regulators a struggle. (Doesn’t everybody?)

There is a lesson to learn from all this. Now Irish politics has arguably matured from those dark days, it is easier to see that, in the North, although sectarian paranoia might have been caused historically by the dominance of unionism, within the island as a whole the rich, potent seam of Celtic-Irish culture creates subconscious anxiety within the North’s Protestant community.

In the same way as the uilleann pipes are, bluntly, more of a musical instrument than the great Highland bagpipe, so Irish culture – the culture of myth, the Celtic church, Irish music, Irish language, Yeats, Joyce and goodness knows who and what else – is compared broadly with what? The celebration of 1690 and pride in the Battle of the Somme. Don’t get me wrong, there is nothing wrong with those, but they are poor pickings by comparison.

My conclusion is counterintuitive: the onus is on the nationalist community. It is up to the nationalists to convince Ulster people there is a place for them in the island as a whole and that their culture will survive in a tsunami of Celtic riches. Quite how that might be achieved is open to debate. But failing to do so will perpetuate paranoia, with unpredictable results.

I will, as a final thought, tell you about my high point as an uilleann piper. It was the day I took a hornpipe off Liam O’Flynn. As we sat in a circle around him, I was surrounded by colleagues enriched with legendary Irish names. Having given tunes to fellow pipers such as Ronan, Conor and Oisín, Liam turned to me.

“What’s your name?” he asked. “Robert,” I replied. He looked puzzled. “Welcome, Robert,” he declared finally. We regarded each other knowingly a moment. “So, let’s play a tune!” he said, grinning. That grin meant the world to me.

Robert Porter is from Belfast, lives in London and is a former solicitor

1 Three relatives dead after apparent murder-suicide in Kanturk, Co Cork
2 Don McLean: ‘My ex-wife is the worst person I ever knew’
3 Gardaí not seeking anyone else in relation to Cork shooting deaths
4 Cork suspected murder-suicide may have been over disputed will
5 Gardaí say 52 people who went missing in 2020 not yet found
Real news has value SUBSCRIBE